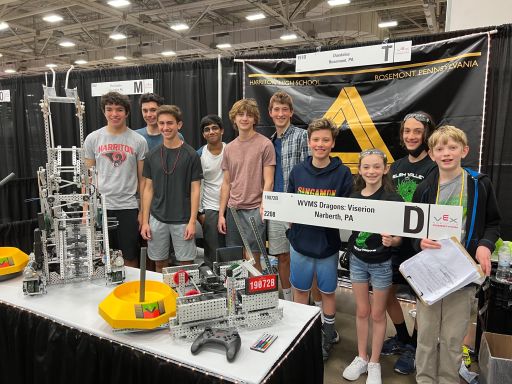 The Harriton High School and Welsh Valley Middle School VEX Robotics programs recently wrapped up a season to remember following their respective qualifications to and impressive performances at the VEX Robotics World Championships, which took place May 3-12 at the Kay Bailey Hutchinson Convention Center in Dallas, Texas.

The event, sponsored by the Northrop Grumman and REC foundations, welcomed more than 500 middle school and 800 high school teams from 36 nations around the world. Using a combination of creative design, innovative programming and skillful driving, Welsh Valley won seven of its 11 matches, while Harriton finished second in its division of 82 teams, winning 10 of 13 matches. The Rams also advanced several rounds into the elimination portion of the tournament, but fell just short of competing for the overall title. Going head-to-head against the top teams from across the globe, the LMSD representatives combined for an exceptional 71% winning percentage!

Along with their exemplary exhibition of STEM acumen, the Rams and Dragons demonstrated excellent sportsmanship, patience and perseverance in a highly competitive and taxing environment. Welsh Valley's group of seventh graders and Harriton's team of juniors are looking to build on their successes next season with what will hopefully be an encore performance at the 2023 VEX World Championships!