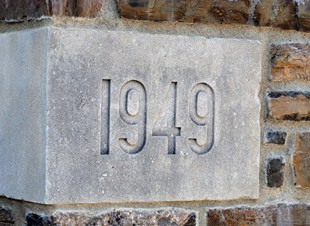 The construction of Penn Valley School began in 1949, and the school opened its doors in September of 1951. In the late 1920's the Lower Merion School District purchased 27 acres of land at a "good price." In 1949 construction was begun of what was to be the showplace of the district. Innovative in its concept and construction, the school was designed by an architect chosen specifically because he had never designed a school. He would not bring pre-conceived ideas about schools based on old concepts.

Great pains were taken to attract fresh ideas in personnel as well. The staff was a careful blend of one-third Lower Merion district teachers, one-third experienced teachers from other districts, and one-third new teachers just out of college.

For those associated with the project, as well as the community, it was love at first sight. The mosaics and stained glass that adorn the school were gifts from the architect. The engineer who oversaw the construction returned periodically to create fabulous sets and stage props for the sixth grade performances. The community responded with enthusiasm by swelling the projected enrollment of 350 students to an opening day count of over 500, with many students transferring in from area private schools.

It was to be a first-class job from start to finish, from its specimen plantings to its lush velvet drapes in an auditorium with a lighting system that surpassed professional theaters in downtown Philadelphia. Community groups used the auditorium for their presentations. Likewise, the full-size gymnasium was designed to accommodate adult-sized athletics.

Great efforts were made to create a unique classroom setting. With the help of an interior decorator, classrooms were painted different colors and given coordinating draperies. Of course, each classroom could boast of a panoramic view and an individual exterior door. Somewhat controversial at the time was the purchase of oriental rugs for the home economics room. The attempt to create a "Williamsburg" style living room was criticized by some as an extravagance. Years later, the rugs were sold for their original price.

Times were different in the 50's -- life was more regimented and there was a greater emphasis on decorum. Penn Valley School was no exception. There was a strict dress code then: no sneakers, no jeans, no teachers in open-toed sandals and girls wore dresses. Boys and girls had separate gym classes and wore school-color bloomers or shorts. The gym period ended with mandatory showers.

The school was a magnet to the spirited community, and the intramural sports events drew large numbers to the games. Soccer and lacrosse players were cheered by parents and friends in packed bleachers. The games were at first thought to be healthy competition, but later were deemed unhealthy after a PH.D. dissertation labeled them as too competitive. The games ended, and the bleachers were dismantled.

World events influenced Penn Valley's early days to a great extent. World War II had been over for a short time when the school's doors first opened in 1951. The Korean War heated up and then the Cold War chilled the country. Among the after school activities was a club to make decorated trays for the veterans hospitals. Many hours were spent in the hallways practicing civil defense in the event of air raids. Perhaps another off-shoot of the experience of war was an unusual teaching position occupied by William Bradford, later principal of Penn Valley from 1970 to 1985. Mr. Bradford served as a "foot correction" teacher in the Lower Merion School District, whose job it was to recognize flat feet and hammer toes and to recommend treatment.

Regardless of the world events that color the times, boys will be boys. Miss Barr recollected that not long after the school opened its doors a curious young man, perhaps wondering about the yearly descent of Santa Claus, decided to give the kindergarten chimney a try. No one knows for sure how long he cried for help that Saturday, but he was finally overheard by two neighborhood girls playing outdoors. They ran home and told their father, who promptly called the fire company. The story had a happy ending, and the chimney had a remodeling to protect future adventurers from the same fate.