The Lower Merion community marked the 50th Anniversary of the Closing of the Ardmore Avenue School with several events on September 12th, 2013. The day began at 9:30 AM with a dedication of an historical marker at the site of the former Ardmore Avenue School at 75 Ardmore Avenue. The unveiling was well attended as several hundred guests filled the parking lot - community members, alumni, friends, family and local dignitaries turned out in droves for the remembrance and celebration of this historic event. Remarks were made by members of the LMHS Class of 1970, Senator Daylin Leach, Representative Tim Briggs and Elizabeth Rogan, President of the Lower Merion Township Board of Commissioners.

Following the dedication, participants joined in a symbolic walk to Lower Merion High School for a formal ceremony where the school community gathered with alumni and dignitaries to commemorate the Moment of Integration. The program included remarks by distinguished alumni Wendell Holland '70 and General Julius Becton '44, as well as Superintendent Dr. Christopher McGinley and LMSD Board President Melissa Gilbert. Additional elements of the event included the presentation of a mural commemorating the Moment of Integration, an elegy to the Ardmore Avenue School, dramatic readings of famous Civil Rights speech excerpts, two distinct student documentaries, a musical performance, and a video greeting from Congressman Chaka Fattah. Alumni and guests then adjourned backstage for a reception followed by a symbolic planting of flower bulbs in the LMHS courtyard. 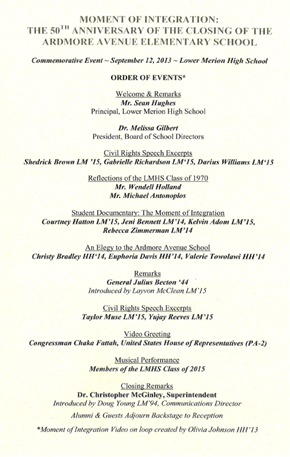 Program from the MOI Event