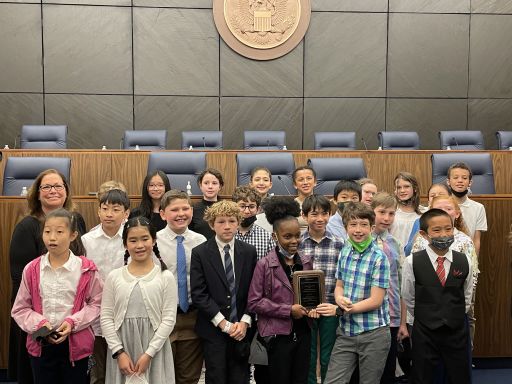 Students from Ms. Friedlander's fifth-grade class at Merion Elementary School made an appearance in Federal Court on May 10, 2022, but they had no worries about facing the judge.

The students participated in the Federal Court essay contest promoted by the Third Circuit Court of Appeals. The class researched the meaning of the "Rule of Law," met with Judge Marjorie "MIdge" Rendell and wrote a strong class essay on the topic.

Judge Rendell, a Senior Judge on the Third Circuit of Appeals, was extremely impressed with their knowledge on the subject. The students were one of two classes recognized as finalists in the contest, which was open to fifth and sixth grade classes in Delaware, New Jersey, Pennsylvania and U.S. Virgin Islands.

During their visit to Federal Court, Mrs. Friedlander's class appeared in the Ceremonial Courtroom before judges of the District Court, as well as judges of the Third Circuit Court of Appeals.