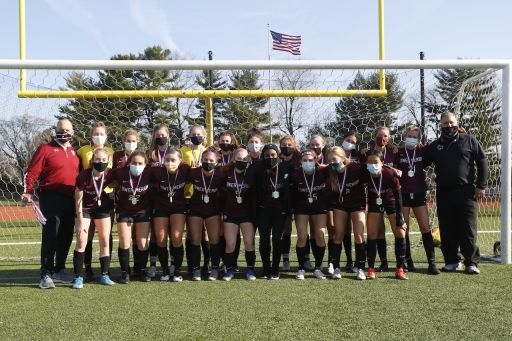 The Boys' Cross Country Team, under the leadership of Head Coach David VanHouten and Assistant Coach Neil Berman, was undefeated (9-0) going into the Nov. 7, 2020, championship meet at Rose Tree Park. The Aces finished 30 points ahead of second-place Conestoga.

More than 40 cross-county runners were part of this year's team.

The coaches say, "Our success was a result of everyone's dedication, focus and hard work, as we began training for our fall season in mid-June. We are grateful for the support from the LM community and for the opportunity to compete this season.

The Girls' Soccer Team, under the leadership of Head Coach Kevin Ries and Assistant Coach Brian Feeney, was undefeated (12-0) going into the Nov. 21, 2020, championship game vs. Radnor. The Aces shut out the Raiders 2-0 on goals scored by Grace Downey and Audrey Brown.

The Aces were only scored upon five times throughout the regular season and playoffs.

The championship team includes nine seniors, two of whom are planning to play for Division I college teams. Audrey Brown will play for the University of Cincinnati and Maya Masotti will play for University of Massachusetts Amherst. The other graduating seniors are Nicole Balduccini, Laura Getselman, Hannah Shalaby, Lily Garton, Elly Ward, Bridget McCann and Ella Braunfeld.

Congratulations to these teams and all LMSD student-athletes for their hard work and dedication.

Lower Merion's virtual open house will take place on Wednesday, January 27th beginning at 7:00 p.m. on Zoom. While the program is geared towards eighth graders and their families, all are welcome to attend!