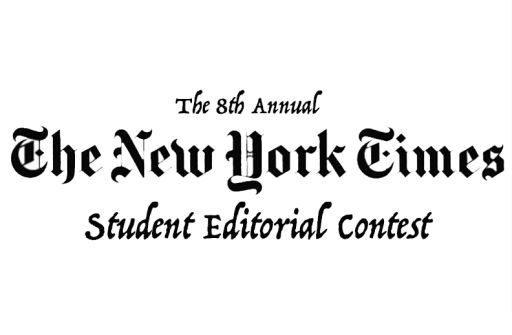 More than 11,2000 students from throughout the United States submitted editorials to this year's contest crafting cogent arguments on a range of issues from the profound to the commonplace. According to The New York Times' website, this year's batch of entries included the following topics, among others: "Snow days being replaced with remote learning. Food waste that contributes to climate change. Anti-Asian discrimination. The exploitation of gig workers. Expectations around women's body hair. School shootings. Omission of the Oxford comma. A calculator company that has a monopoly in math classes. Gamers not being considered real athletes."

Howard was one of only 16 students to earn the runner-up distinction for her essay entitled, Why I Want to Be a Foreign Exchange Student 30 Minutes Away, which explored the divisive culture of partisanship in America, the ever-growing schism between opposing political ideologies and how this problem will continue to devolve as each group becomes more entrenched in their respective echo chambers. As a runner-up, Howard's essay was among the top-26 in the nation. The essay can be found here on The New York Times' website.

Greenblatt's piece – Combating Stress? Piece of Cake! – also advanced to the final round, which means she finished among the top-200 entries out of the 11,202 total submissions. A full list of results can be found here.