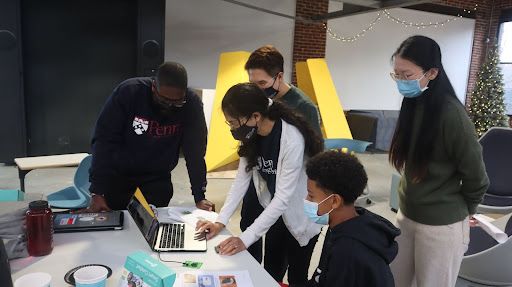 Lower Merion High School recently hosted its third annual "Program.it" event at Flux Space in Norristown with the aim of expanding inclusivity in and fostering a passion for computer science education with presentations from professional programmers and a variety of hands-on coding activities. Throughout the day, students were exposed to a multitude of possibilities made possible through computer science and learned about what it takes to become a professional in this highly competitive field.

The participants in "Program.it" were ninth and tenth grade students nominated by math and science teachers for demonstrated academic excellence. Each was invited to spend the day at the Flux to learn more about technology and programming.

The event kicked off with a demonstration by a robotics-centered security company by the name of Asylon. Speakers Brent McLaughin and Adam Mohammed discussed several of Asylon's advanced automated technologies including their robotic perimeter security dogs and self-charging drone patrols. Much to the delight of the students, the demo featured one of Boston Dynamic's famous dog-like robots, which pranced around the room and posed for pictures with students.

Next up was Penn Engineering's IoT4Ag group, a team that addresses food, energy and water security problems through Internet of Thing (IoT) technologies. They led a hands-on "micro:bit" activity where students used the tiny programmable computers in conjunction with the programming language Python to write code that would guide a robot through a set of challenges, including testing soil moisture and controlling a self-navigating robot.

Following Penn Engineering were LM alums Prince Geutler '20, Justin Robertson '21 and Katherine Wang '20, who offered their perspectives on computer science in college and reflected on their experiences in high school. All noted that Lower Merion's abundant computer science offerings helped spark a passion for the field and played an integral role in launching their computer science careers. To conclude the event, students took part in a drone competition where they programmed a Tello mini-drone to successfully navigate through an obstacle course.

This engaging event was coordinated by teachers Tom Swope, Justin Mansor, John Vaccaro and Taj Byrd with assistance from members of the Computer Science Club. This student-run organization plans various community outreach events like coding competitions, teaching Python at the middle school and promoting computer science to students of all backgrounds through Hackathons.

Lower Merion High School is set to host the 12th Annual "Amazing Ace" competition on Friday, January 28 beginning at 7:00 p.m. in the auditorium!

Faculty and staff recently hosted a virtual presentation to eighth grade students and families with important information regarding their upcoming transition to high school.