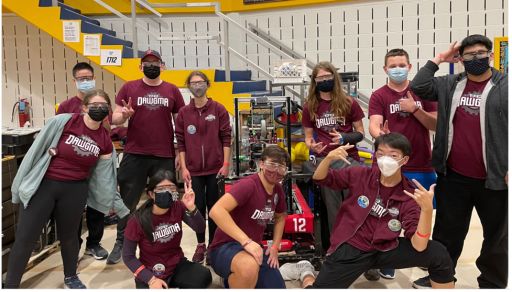 At Ramp Riot, teams compete in the Infinite Recharge Game, where two Alliances (red & blue) work to protect their city from approaching asteroids caused by a distant space skirmish. At the start of each match, there is a 15-second Autonomous Period where the red and blue droids must follow pre-programmed instructions with no operator control.

Throughout the match, Alliances score points by:

The Alliance with the highest score at the end of the match wins. The last part of the match (numbers 5 & 6 above) is no easy task. Teams must operate their droids to extend an "arm" up to reach what looks like a coat-hanger that pivots in the middle and balances only when two (or three) robots all do a "chin-up" elevating the robot clear of the ground.

While Ramp Riot may be a highly competitive event, it is much more than just a robotics competition. Attending teams use Ramp Riot to introduce rookie members to the FIRST® atmosphere and gear up for the coming season. Ramp Riot has also hosted helpful seminars and information sessions for teams to share what they know and learn from each other. Community members find plenty of fun between matches with face painting, live local radio stations (with prizes!), robot driving zones and even a guest appearance from the Philly Phanatic!

Dawmga1712 Supporting Team via Livestream Over the Course of the Weekend