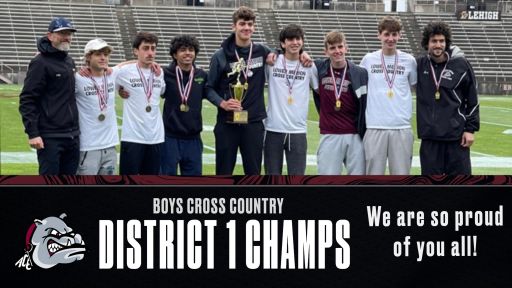 The Lower Merion High School boys cross country team recently won the PIAA AAA District One Championships held at Lehigh University. The Aces top-five runners concluded the day with a collective time of 1:21:24.8 to clinch the team title with a total of 128 points as they finished just ahead Downingtown East and Central Bucks West.

Runners Alex Bullard, Sarem Kahn, Simon Schmieder and Drew Gannon all medalled while strong performances from David Litvin, Alex Goonewardene and Jake Krimsky helped to secure the victory. This was the first district championship for the Lower Merion cross country program the 1960's.

Special thanks to the all of the XC parents who provided tremendous support throughout the entire season. Congratulations to coaches Van Houten, Berman and the entire team on this outstanding accomplishment!

Lower Merion's Cross Country team will now compete in the PIAA AAA State Championships, which will be held on Saturday, November 6 in Hershey.