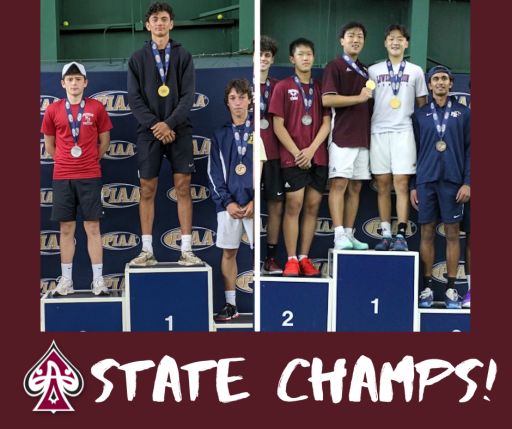 Just one week after taking home the team title at the PIAA AAA State Championships, Lower Merion High School boys tennis standouts Vikas Miller and Brian and Justin Yi returned to the Hershey Racquet Club where they ultimately added another pair of gold medals to their already stellar resumes as they went on to win the state singles and doubles crowns, respectively.

Miller and the Yi brothers helped guide their team to one of the best seasons in program history as the undefeated Aces (24-0) won the Central, District and State championships, barely dropping a set throughout all of their matches. Miller also won the Central League singles title, while Brian and Justin Yi captured top honors at both the Central League and District levels.

In the state tournament, Miller faced one of his toughest challenges in the quarterfinal round as he trailed District 6 champion David Lindsay early in the match before rallying to victory, 3-6, 6-4, 7-6 (5). He then went on to win the semifinals in straight sets before taking down Northeast High School's David Mamalet in the championship round, 7-5, 6-1.

On a nearby court, the dynamic sibling duo of Brian and Justin Yi were putting the finishing touches on the Aces' banner year as they took down the challengers from Conestoga (5-7, 6-1, 6-4) en route to claiming the state doubles title. Both underclassmen, Justin, a junior, and Brian, who is only a freshman, will have the unique opportunity of defending their doubles crown when they return for their senior and sophomore seasons. Next fall, Miller will be attending the University of Notre Dame, where he will continue his academic and athletic career.

BCMS 8th graders celebrated the end of a unique year in a unique way.