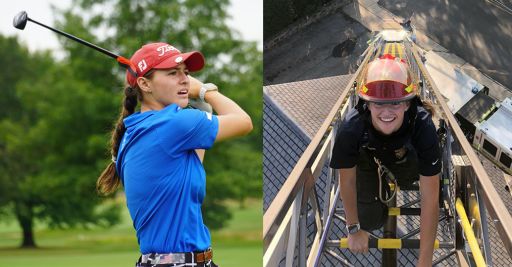 Sydney Yermish, a Lower Merion High School junior and golfing ace has already amassed quite a collection of first-place finishes; however, the 'first' she is most proud of isn't sitting in a trophy case.

A fierce competitor, Sydney finds substantial satisfaction in her greatness on the greens, but it is through her service as a volunteer first responder with the Penn Wynne-Overbrook Hills Fire Department she has found deeper meaning. Through this service, Sydney has also experienced profound loss.

On the night of July 4, 2021, the Penn Wynne-Overbrook Hills crew responded to a house fire. After becoming trapped on the third floor, firefighter Sean DeMuynck issued a mayday before he was eventually pulled from the burning house. Unconscious and unresponsive, DeMuynck was rushed to nearby Lankenau Medical Center where he ultimately passed away from his injuries at 12:22 a.m.

When Sydney signed on as a volunteer in early 2020, it was DeMuynck who took her under his wing. He was her mentor and friend. It was this relationship and DeMuynck's tragic passing that inspired Sydney to launch her "Birdies for the Fallen" campaign, using her golf matches to raise money and awareness for The National Fallen Firefighters Foundation (NFFF) – a non-profit that develops and expands programs to honor fallen fire heroes and assist the families left in the wake of loss. Sydney chose to support the NFFF because it holds a special place in her heart after seeing first-hand the impact and significance of their efforts with the DeMuynck family.

"Sean was always there to explain firefighting concepts and teach anyone who wanted to listen," remembers Sydney. "He would be the person I'd go to every time I wanted to learn more about something or had a question. Everything came natural to him. He was probably the smartest, most passionate and inspiring person I'll ever meet."

To Sydney and her fellow firefighters, there wasn't much DeMuynck couldn't do. For example, not only could he easily tie every requisite rescue knot imaginable, he also had the unique ability to truly connect with people and clearly convey complex information, teaching others to tie the same challenging knot just as effortlessly as he had. He was always prepared with any and every item a firefighter could potentially need in any emergency situation. He was a lifelong learner who was constantly studying and working on his craft. He inspired others to be the best they could be.

"There's this thing called duty crew," recalls Sydney, "and it's basically where guys will staff the firehouse for a couple hours. Everyone would just sit around watching TV and waste the time doing nothing productive, but then Sean would get everybody up to do drills. To be better. 'Just one more rep, one more rep he would say.'"

Sydney dearly misses her friend and mentor, but is using the memory of DeMuynck as motivation and channeling her grief into championships. In the face of tempestuous winds at Limerick's Turtle Creek Golf Club, Yermish still managed to capture the crown at the recent Central Athletic League (CAL) championships recording a one-over par tally of 73 – a feat made even more impressive by the fact that she finished a staggering 15 strokes ahead of her closest competitor.

With the win, Yermish punched her ticket to the upcoming PIAA District One Golf Championships, a title she won as a ninth grader two years ago on the same Turtle Creek course she just claimed her Central League gold. In the opening round of that tournament, the then-freshmen put on a show - and put her name on the map - shooting a remarkable six-under par 65. For context, Sydney's score of 65 two years ago was seven strokes better than this year's boys Central League champion, who is a junior.

Sydney, currently being courted by a host of high-level Division I college programs, has big aspirations for the remainder of the season. With the district and state championships fast approaching, she sees a pair of opportunities to potentially add to her trophy case, but there is something more to play for now. There is a deeper meaning. The better she plays, the more money she will raise for The National Fallen Firefighters Foundation in memory and honor of her friend and mentor Sean DeMuynck.

There are two ways to contribute to Birdies for the Fallen. Through Sydney's fundraising page, interested parties can either give a one-time, tax-deductible donation or make a pledge (also tax deductible) for each birdie she makes during her final two tournaments of the season. The site has already received donations and pledges totaling $5,385 and will remain open until she sinks her last putt on this fall's final 18th green.

Read more about Update on COVID Testing for Students

Mailman and the Aces finished last season in flawless fashion with a perfect 24-0 while winning the Central League, District and State championships.