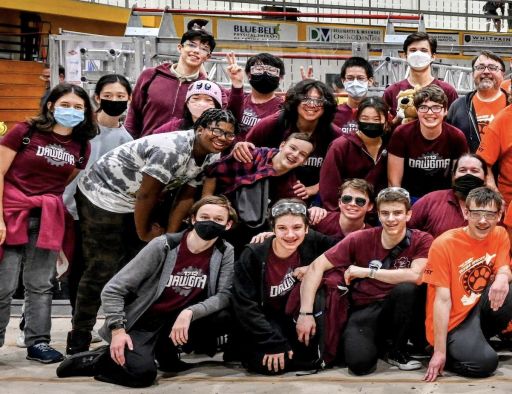 At this year's Ramp Riot, 31 participating teams from Pennsylvania, New Jersey, Delaware and New York went head-to-head in the FIRST Robotics competition game known as Rapid React. In Rapid React, team members maneuver their robots through a course as they try to score points by placing oversized tennis balls into a central goal before attempting to get their robot to successfully climb monkey bars at the end of the match.

Dawgma got off to a good start winning three-out-of-five qualification matches and was selected to join the second-ranked alliance for the playoffs, along with teams from Hershey, Haverford and Palmyra Area high schools. The LM team then had a hiccup as their robot suffered a radio-power issue leaving it out of commission, which ultimately led to an unfortunate defeat sending their alliance into a lower bracket.

After getting their robot up and running, Lower Merion's alliance reeled off several victories before punching its ticket to the title match with a razor-thin 80-79 win in the semifinals. Dawgma and company then went on to take two-out-of-three games to win the Ramp Riot championship.

Moving forward, Dawgma will continue its preparations for the upcoming 2023 FIRST Robotics competition season, which will begin on January 7, 2023, as the team hosts the local satellite event at Lower Merion High School.