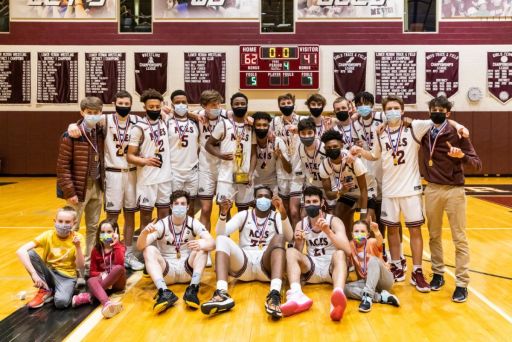 Since 1996, the Lower Merion boys basketball team has won every kind of championship a Pennsylvania high school team can win — state titles, league titles, holiday tournaments –– except one. On Friday night in the Kobe Bryant Gymnasium, on the 25th anniversary of the Kobe-led Aces beating Chester for the District championship, the Maroon and White finally put an end to their long district title drought. In a crazy, challenging pandemic year since Kobe passed, the 2021 Aces channeled Bryant's legacy and wrote their own championship chapter as they captured the PIAA District 1 6A crown in a lopsided 62-41 victory over Abington.

With the win, the Aces advance directly to the State Semifinals and will host the top-ranked team in Pennsylvania and #9-ranked team in the country Tuesday night, undefeated Archbishop Wood of the Philadelphia Catholic League, at 7:00 p.m. in Bryant Gymnasium with a trip to Hershey on the line. Though the Aces will be underdogs against a top private school program, the team is excited about the opportunity and looking forward to the challenge.

Tuesday's game will be live-streamed here. The link will take you to the Lower Merion Athletics YouTube page where you will find an option to choose to watch a student broadcast of the game or a version without commentary.

Supt. Copeland announces that he will retire in the fall.

Members of LM and Harriton's SAGE clubs collaborated on a full-day virtual conference about "Everyday Activism" for their fellow students.

School Board to Resume In-Person Meetings

The Lower Merion Board of School Directors will return to in-person Board Meetings beginning on Monday, April 12, 2021.

Read more about School Board to Resume In-Person Meetings

If you've moved within the Lower Merion School District, remember to update your residency information with the LMSD Registration Office.