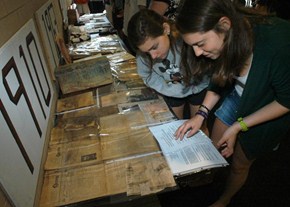 In 1894, with the consolidation of the area's three village high schools (Merion Square, Bryn Mawr and Ardmore), Lower Merion began its first year in a stone building shared with the Ardmore Avenue Elementary School in Ardmore. In 1897, nine students participated in the school's first commencement ceremony. The original high school faculty had seven members, including the principal and superintendent. The curriculum offered only a two-year preparation for either college or industry.

The Ardmore Avenue School burned in 1900 but was rebuilt, also of stone. In 1911, the high school moved out of the elementary school to new quarters designed and constructed at the present site of 245 E. Montgomery Avenue. Dedicated on December 2, 1911, "Lower Merion Senior High School" was an impressive granite and stone edifice considered to be one of the finest new educational facilities in the state. The 17-acre property, complete with three stone-arch entrances, landscaped grounds and a football stadium, eventually grew to 23 acres, with the purchase and annexation of the Clarke House. At its opening, twenty-one staff members were employed under principal "Professor" Charles B. Pennypacker.

In 1922, Ardmore Junior High School was constructed adjacent to the senior high school and in 1926 two new wings were added on either side of the main high school building. These additions doubled the size of the original school, helping to accommodate rapidly increasing enrollment. The present administration building was constructed in 1932 to provide office space and an additional twenty-five classrooms. By 1940, the teaching staff had expanded to 61 under the direction of principal George H. Gilbert. Total student enrollment was 1461 for grades 10-12.

In 1943 an adjoining "technical" building was added along the School House Lane side to house shops for auto repair, metal, print, wood-working and drafting. In 1950 a cafeteria/library wing designed by the Philadelphia firm of Savory, Scheetz and Gilmour was added near Pennypacker athletic field. That same year the 18-acre General H. H. Arnold athletic fields opened on land located directly across Montgomery Ave. By 1957, the enrollment had grown to 1,663 students and the time had come to build a second high school (Harriton) in Lower Merion Township. The original 1910 building was demolished in 1963 and replaced by an air-conditioned classroom structure designed by H.A. Kuljian and Co.

Due to enrollment increases and to accommodate changing program needs, the District has frequently reconfigured spaces in the facility, including the re-opening of classroom and storage space in the former Ardmore Junior High School in the 1990's. (The remaining portion of the junior high was demolished in 1992). The rooms in the technical building have been converted for other uses, including art classes, computer labs and the school's television studio. Original classrooms have been re-captured as spaces for individualized learning support and students with special needs. The central lobby that connected the 1963 and 1932 structures was converted to a college-style help center in 2004.

In 2004, a citizen's advisory committee determined that existing facilities no longer met the standards of the Lower Merion community and recommended that a new school configured for 21st century education be constructed on the same site. The Board and administration authorized construction of the school in 2007. The new school was completed in time for the beginning of the 2010 academic year, with state of the art facilities that support dynamic, world-class curricular and co-curricular programs.

More than 1400 students currently attend Lower Merion. The school continually ranks among the nation's finest, cited by "Wall Street Journal" as one of the top 50 schools - public or private in the United States. Lower Merion is a National Blue Ribbon School of Excellence known for providing a rigorous, liberal arts education that prepares students for post-high school success.