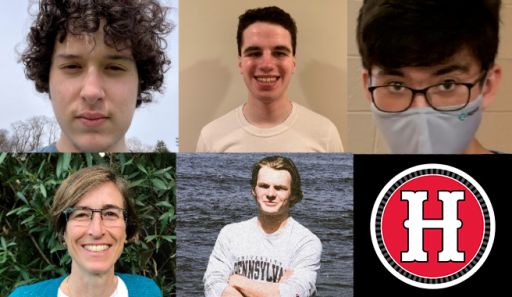 Four Harriton High School students recently had their research paper - A ZTF Look at Optical Variability of Young Stellar Objects in the North America and Pelican Nebulae Complex - accepted for publication in the prestigious Astronomical Journal of the American Astronomical Society. A pre-print copy is available to read here.

Seniors Noah Braunfeld, Owen Lester, Miles Gee and eleventh grader Thaddaeus Kiker are the nascent astronomers responsible for this stellar accomplishment. Kiker was a student at Harriton from 2019-21 before his family's move to California while Braunfeld, Lester and Gee remained in Rosemont. The newfound difficulties presented by their continental divide probably seemed a bit more inconsequential given the interstellar nature of their shared interests, so the Rams kept close and continued exploring space together.

After heading west, the now Sunny Hills High School junior had the opportunity to work with Astrophysicist Professor Dr. Lynne Hillenbrand on a project investigating protostars (baby stars). With the help of Dr. Hillenbrand, Kiker and company collaborated to pen their research paper which, after a lengthy peer review process, was recently accepted for publication.

"Together with Dr. Hillenbrand," explained Kiker, "we explored the variability of young stellar objects – YSOs, you can think of them as baby stars – with millions of observations taken from instruments like the Zwicky Transient Facility (ZTF) and Kepler Space Telescope, made possible by our extensive use of the Python programming language and its associated libraries."

The team relied heavily on the ZTF - a public-private partnership geared toward a systematic study of the night sky using an extremely wide-field of view camera, which scans the full Northern Sky every two days – to study the variability of far-flung baby stars. The resulting large area survey enables the astronomical community to explore a wide range of time-domain science ranging from near-earth asteroids to the study of distant super-luminous supernovae. A star exhibits variability if its apparent magnitude (brightness) is altered in some way as seen from the perspective on Earth.

Simply put, like the mercurial moods of toddlers and teenagers, baby stars also exhibit similar erratic or variable behavior. This variable behavior is what Kiker and the crew were trying to observe in their study.

The distinct forms and structures of the curved rays of light given off by these baby stars allowed the team to better asses the relationship between the stars' variability and the physical processes that create them; for example, the force of gravity, which makes stars more compact, or the heat released by nuclear reactions at stars' cores causing them to expand.

"Our work focused on categorizing the three hundred odd stars in our final sample into categories similar to these based on morphological features in their light-curves, and then evaluating the connection between these behavioral patterns with the underlying physical processes that are theorized to drive them."

"As part of this, we used two metrics originally developed for studies that primarily used data from space-based telescopes, the Quasi-Periodicity (Q) and Flux-Asymmetry (M) metrics. Consequently, a good portion of our work actually involved investigating whether or not these metrics were applicable to the majority of the ground-based data from ZTF that we used in our work. After a good deal of analysis and experimentation we are happy to say they are, and we accordingly outlined a set of recommended best practices for their use in future, similar scenarios in our paper."

The team was able to demonstrate that the metrics employed using data from space-based telescopes are also applicable to the majority of ground-based data from the ZTF used in their research. As one of the earliest applications of the Quasi-Periodicity and Flux-Asymmetry metrics to ground-based data, the Rams and Dr. Hillenbrand were able to develop a set of best-practices that can be used for any similar studies down the road.

LMSD's Strategic Plan provides a framework for a collective, intentional and positive approach to change. Its five aspirational pathways guide us toward continual innovation and transformation to further educational excellence for every student. This story serves as an example of Strategic Pathways #2: Transformative Curriculum and #4: Student-Driven Schools. To learn more about #LMSDAllForward and the Strategic Pathways, click here.