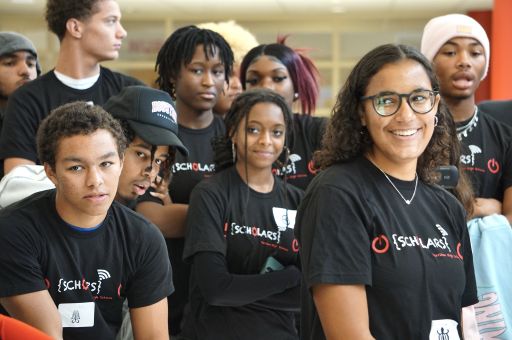 Harriton High School recently hosted a special hybrid event as students from the POWER and Becton Scholars programs had the opportunity to learn about a variety of educational and professional opportunities related to science, technology, engineering and math (STEM). While Lower Merion's Becton Scholars couldn't be there in-person, they were able to virtually join the Rams in Rosemont participating in the event via Zoom.

POWER Scholars Program Coordinator Mr. Nate Bantoe, who also serves as the sponsor for the District's National Society for Black Engineers (NSBE), welcomed the scholars from Harriton and Lower Merion before introducing Dr. Joi Spraggins, a Diversity, Equity & Inclusion consultant and CEO of Legacy Bridges STEM Academy, Inc. Dr. Joi shared some inspiring words on the importance of education and encouraged students to take full advantage of the wealth of information and resources being made available to them through the program. She also highlighted Philadelphia-native Lieutenant Colonel George Hardy, who served with the legendary Tuskegee Airmen, the first African-American aviators in the U.S. Army Air Corps.

The next speaker was Second Lieutenant Trevon Averhart, who shared his experience attending the United States Air Force Academy and discussed the many doors this opened for him. He explained how an education at the Air Force Academy is provided at no cost to cadets, which means no crippling student loan debt after graduation. Upon receiving their degree, cadets are commissioned as officers in the U.S. Air Force. The length of this commitment can vary depending on one's desired career path.

Jerod Konowal, Executive Officer of the Navy-ROTC Philadelphia Consortium, and Battalion Advisor Lieutenant Alexis Brown were on hand to discuss opportunities with Villanova University's Naval Reserve Officer Training Corps (NROTC) Program. The NROTC Program was established to commission college graduates as naval officers who possess a basic professional background, are motivated toward careers in the naval service and have a potential for future development in mind and character so as to assume the highest responsibilities of command, citizenship and government. Like the U.S. Air Force Academy, high school students who apply for ROTC programs are eligible for scholarships covering the full cost of tuition, fees and textbooks for four years, plus a monthly stipend for personal expenses.

Next up were a pair of representatives from Educational Solution Enterprises (ESE), President Kurt Maly and District Manager John Sneyers, who discussed potential opportunities with ESE, which serves as an educational partner for technical training solutions representing leading manufacturers of hands-on training equipment and curricula, as well as the many companies they contract with.

The final speaker of the afternoon was Todd Toth, manager of the NASA Globe Program at the Goddard Space Flight Center, who discussed the GLOBE Program. The Global Learning & Observations to Benefit the Environment (GLOBE) Program has been providing students with the opportunity to meaningfully contribute to the understanding of the global environment. GLOBE's mission is to increase awareness about the global environment, contribute to increased scientific understanding of the Earth and support improved student achievement in science and mathematics.