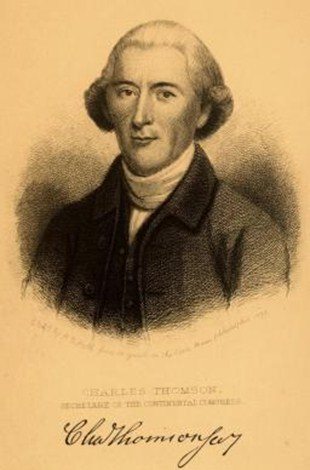 In 1697, William Penn sold a 700-acre tract of land to Rowland Ellis, a Welsh Quaker. Ellis built a replica of his home in Wales and named it Bryn Mawr. Years later, Ellis sold his home to Richard Harrison who had married a local woman named Hannah Norris. Some of the land holdings of her family were known as Norriton. Thus, the combination of the names of Harrison and Norris became known as Harriton. It should be noted that Richard Harrison was a slave owner, who built the fortune of his tobacco plantation on the abhorrent practice of using enslaved African Americans as laborers.

That practice ended after the daughter of Richard and Hannah Harrison, also named Hannah, married ardent abolitionist Charles Thomson, who spent his final years at the site. Mr. Thomson was Secretary of the Continental Congress from 1774 to 1779. Later, he was the moving spirit on the committee that decided the final design of the Great Seal of the United States. In a letter to President Thomas Jefferson decrying slavery, Mr. Thomson wrote, “This is a cancer that we must get rid of. It is a blot in our character that must be wiped out. If it cannot be done by religion, reason and philosophy, confident I am that it will one day be by blood.”

A plaque outside Harriton's main office honors Thomson's achievements. His former home and estate is located on Harriton Road, and it is maintained by "The Friends of the Harriton Plantation".

In 1957, a new "campus-style" school was designed by renowned architect Vincent Kling. It was built by the Lower Merion School District and situated on a portion of the grounds belonging to Charles Thomson, which gave Harriton High School its name. Harriton High School opened its doors for the first time in 1958, with dedication ceremonies held on Tuesday, October 14. Dr. Wilfred B. Wolcott, Jr. was the first principal from 1958-1965. In June 1959, Harriton High School celebrated the first graduation of its students.

Due to enrollment increases and to accommodate changing program needs, the District added several temporary classrooms to the Harriton campus in the late 1990's. In 2004, a citizen's advisory committee recommended that a new school be constructed to replace the existing facility. Work began on the new Harriton High in 2006 and construction was completed in the Fall of 2009.

The school colors are red, white and black, and the school mascot is the Ram.

Harriton High School has twice been recognized for its excellence as a "Blue Ribbon School" by the state of Pennsylvania and the United States Department of Education. Students have made their mark in the disciplines of science, math, literature, music, and art. The Harriton Science Olympiad Team has placed among the top 10 at the U.S. Science Olympiad for 23 consecutive years, winning three U.S. titles and 18 of the last state championships in that span.