Welcome to our New Middle School Newsletter. Our plan is to send this out four times each year between now and the planned opening of Lower Merion School District’s new middle school in September 2022. We’ll share information about all the exciting developments related to the new school – from construction updates to curriculum planning to contests where students and community members will help decide the school’s name, colors and mascot. We hope you’ll not only read the newsletter, but forward it to your friends and neighbors who might not receive it directly. Our new school will benefit not only its students, but the wider community of Lower Merion and Narberth. And we want as many residents involved in the process as possible.

If you have any ideas or questions you’d like answered in an upcoming edition, please feel free to email me, Amy Buckman, Director of School and Community Relations, at   buckmaa@lmsd.org.

While the new middle school is an exciting project for the Lower Merion School District and the entire community, it’s most exciting for those students who will be lucky enough to spend their middle school years inside its walls. Students who will be the first 5th and 6th graders in 2022 are current 2nd and 3rd graders at Penn Wynne and Gladwyne elementary schools. With the help of Principals Shawn Bernatowicz and Veronica Ellers, we’ve selected some of those students as our New Middle School Ambassadors. Over the next three years, we’ll watch them grow as the school grows from concept to reality, and they’ll contribute to our newsletters from their unique perspectives.

On October 17, our Ambassadors visited the new middle school site at 1860 Montgomery Avenue with Supt. Copeland. They watched as demolition crews took down what had been a gymnasium for the former Northeastern Christian Junior College. They also were able to walk into the foyer of the mansion, where crews are working to take down and preserve wood paneling and other resources that may become design elements in the new school.

All of the Ambassadors very excited about what they saw and were looking forward to sharing their observations with the classmates and families. Cara said, “I think it was cool that I got to see the gym knocked down with the ceiling and everything. I really liked that.”

Bianca said, “I thought the big cranes moving the stuff from the gym, that was cool – knocking it down. With my own hands, I mean, I couldn’t even pick up one cinderblock!”

Kieran also liked the mansion and said he’s looking forward to when he’ll be a student at the new school, “(We’ll be) the first grade that’s going to get to go the whole way through the middle school!”

Ambassador Mireya shared her essay about the visit: 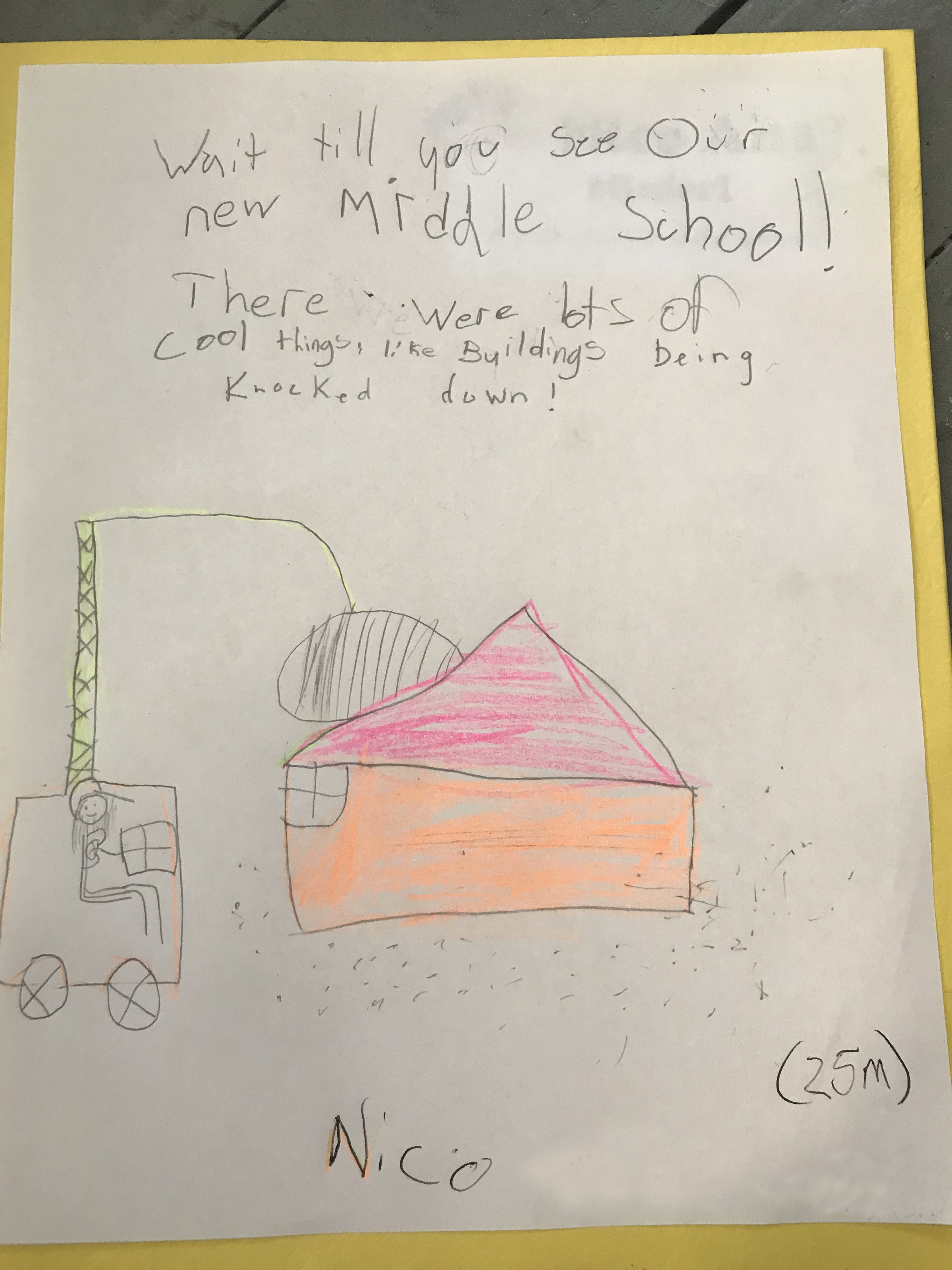 Ambassador Nico also shared this drawing (above) about the special field trip. It reads: "Wait til you see our new middle school! There were lots of cool things, like buildings being knocked down!"

Click "play" in the box above to watch a short video of the New Middle School Ambassadors having some fun as they meet new friends and tour the site of their future school!

The site where the new middle school will be built has an interesting history. The main building was a mansion originally built as a family home for Morris Clothier, chairman of the Strawbridge and Clothier stores. Later, it became the site of the Northeastern Christian Junior College before most recently serving as the Foundation for Islamic Education.

To build a 21st century middle school, the existing structures on the site are being demolished. The process began in late August. But before the heavy demolition equipment moved in, the School District opened the site up to local firefighters for training exercises.

The firefighters used the vacant dormitory buildings to practice techniques that could be necessary for them to save lives and prevent the destruction of property. Lower Merion’s Chief Fire Officer and Fire Marshal Charles McGarvey explained, “As part of our ongoing training program and in an effort to maintain the highest level of proficiency, the use of this structure will allow for training that we would otherwise not be able to provide to our firefighters.”

Since then, both dormitories have been removed and their former sites have been restored and stabilized. Next on the demolition list was the gymnasium, which you can read more about above. Once the gymnasium is taken down, demolition of the carriage house and garage will begin, followed by the mansion and garden walls. That’s expected to start in mid-November.

In addition to the demolition work, contractors have been doing additional testing to see what additional work will be required to prepare the site for construction. The testing revealed extensive underground rock, that will have to be removed by blasting. The timing and process for the blasting is being coordinated with the LM Fire Department. Fire officials say neighbors may hear a thud when it occurs – but add there won’t be an exciting implosion as there was when, for example, Veterans Stadium was brought down. In fact, they said, some neighbors may not hear or feel a thing.

The goal is to get the site work completed so that construction of the new building can begin in Summer 2020.

While that work is ongoing at 1860, the District submitted tentative plans for playing fields on the properties at 1800 W. Montgomery Ave. and 1835 County Line Road. Those plans have been tabled, pending continuing discussions with the township.

Since the new middle school was first envisioned, a fundamental goal has been to design a school that helps foster the tenets of our ambitious and innovative strategic plan, “All Forward.” The environment and building design itself can encourage student and staff collaboration and innovation in new and exciting ways.

Our curriculum team has been working as a part of the design team. We want to ensure that the facility provides us with enough flexibility to not only maintain our program, but also to consider possibilities to provide new experiences for students.

We’ve been gathering feedback from teachers and staff members from all levels and disciplines and we are designing the building with the future in mind. Some of the questions we are considering include: What experiences would we like to provide for students that are now limited in some way? How can we reimagine the what the middle school years for students could be? To what extent is student choice part of the program?

“All Forward” challenges us to answer these questions as we provide a transformative curriculum that is student-centered. As such, we are thinking of the middle years program as we consider space, time, schedules, and programs. We are thankful to have many educators invested in the strategic plan and excited to contribute to our thinking around these issues. We will be providing updates through future newsletters and public updates on the re-imagining of the 5-8 student experience.

A: As of now, 5th and 6th grades will definitely attend the new school when it opens in September 2022. The Administration and School Board are currently reviewing various scenarios – considering student numbers and transportation costs among other issues – to determine if that might change to include grades 5-7, or even grades 5-8. We’ll be sure to let you know once that decision is finalized.

A: Absolutely! And any interested parents/guardians from Penn Wynne and Gladwyne whose children will be attending the new school are encouraged to get involved. Please email Kristy kgastowe@gmail.com or Michele michvessal@gmail.com for Gladwyne or Amy amybotel@gmail.com for Penn Wynne and let them know you’re interested. We’re hoping to get volunteers from both schools together soon to start planning events such as student mixers, so students from both schools can make new friends.

A: These illustrations show the architects’ vision of the school’s exterior and also of a “learning community.” The finishes shown for the outside may change, but the concept of a main entrance, close to the public areas – the gymnasium and theater – is set. The school will also feature a “heart” area, where students can congregate to socialize and collaborate. And traditional single classrooms will be replaced by “learning communities,” which are flexible spaces that can be used for large-group team teaching, small group instruction or student collaboration.

A: The new school will reduce the student populations in the two existing middle schools. That will allow space at BCMS and WVMS to be reimagined and reconfigured to better support team teaching, smaller group instruction and collaboration. Teachers at the existing schools are already innovatively using space in their buildings in support of these concepts and will have input in how existing spaces can be updated and adapted.