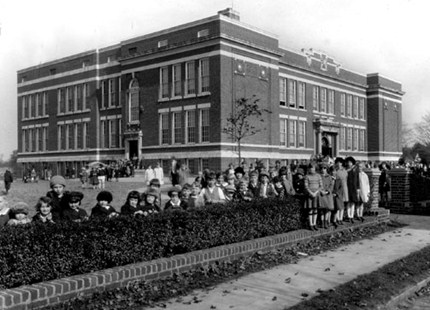 In February 1914, the Lower Merion School Board approved a lease of land from the Lower Merion Academy and built Cynwyd Elementary School. Although the building was still under construction, 189 students entered school on January 4, 1915.

The school was designed by the architectural firm of Savery, Scheetz and Savery. It was built with central heat, indoor plumbing and large windows which helped to make each classroom bright and airy. The original building had eight classrooms, the ones now facing Levering Mill Road. Each classroom represented one grade, with the exception of grades seven and eight, which were combined.

In 1920, the cafeteria and auditorium/gymnasium were added along with more classrooms, which more than doubled the size of the school. In 1938, the building was remodeled creating more classroom space, modernizing the cafeteria and updating the heating, clock, bell and telephone systems. In 1967, a classroom/library wing was added to Cynwyd.

Cynwyd recently held a "Centennial Celebration" in honor of the school's 100th anniversary. The school and community celebrated throughout the year with a series of events, including an alumni reception, time capsule ceremony, Centennial Parade and much more. Learn more about  Cynwyd's 100th Anniversary.