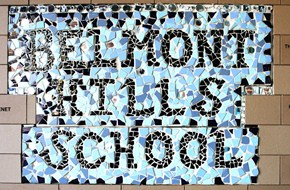 Fun Fact: The community of Belmont Hills used to be known as "Goat Hill." Portuguese and Italian immigrants settled in the area and their goats pastured in the hills until the late 19th century.

Fun Fact: Due to declining enrollment, the school was closed for more than 15 years until it re-opened its doors in 1998.