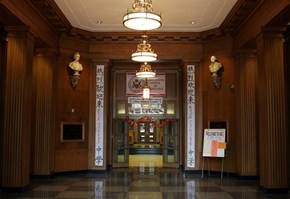 Bala Cynwyd Junior High School (since 1978 a middle school) is a brick building at 510 Bryn Mawr Ave., Bala Cynwyd, which opened in September, 1939, on nine and a half acres, some of which are owned by the trustees of the Lower Merion Academy.

In 1939-40 George W. R. Kirkpatrick was principal with a teaching staff of thirty-four for grades 7-9. An adjacent athletic field, Amherst Field, was added later. Major renovations were made in 1963, when the center courtyard was created by adding a fourth side to a "C" formation.

An addition and major interior changes occurred in 1999 when a gym/cafeteria wing was added, and the open courtyard was covered. The architect in 1938 was Davis and Dunlap, H. Bartol Register, Associated. The architect for the 1999 changes was Einhorn, Yaffee, Prescott. Since 1978 this school has been a middle school for grades 6-8.