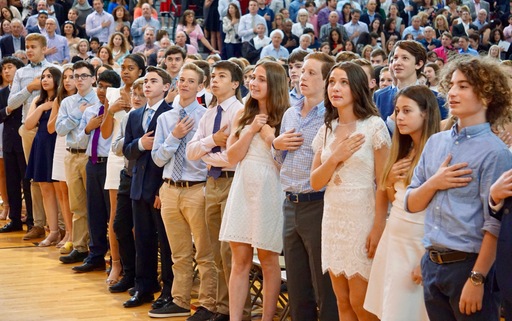 On Thursday afternoon, June 13, 2019, Welsh Valley Middle School held its annual 8th Grade Recognition Ceremony as family and friends gathered in the Harriton High School gymnasium and auditorium to watch students receive their Certificates of Promotion. In September, these promising students will be moving on to either Lower Merion or Harriton high schools.

Principal Christopher Hall welcomed all those in attendance before a recitation of the Pledge of Allegiance and singing of The Star-Spangled Banner. Choral Director Mary Callaghan then led the 8th Grade Advanced Chorus as they performed the Welsh Valley school song and a rousing rendition of Bill Withers' Lean on Me.

Student Council President Alexandra Kobak next addressed her classmates followed by Principal Hall, who provided the final remarks of the afternoon, before each student had their name called to receive their Certificates of Promotion. Musical accompaniment was provided by the seventh-grade orchestra under the direction of Instrumental Director Gregg Eskin. Following the ceremony, families gathered in the gymnasium and outside the school for photos and celebrations.

Congratulations to the Class of 2019 and best of luck next year!