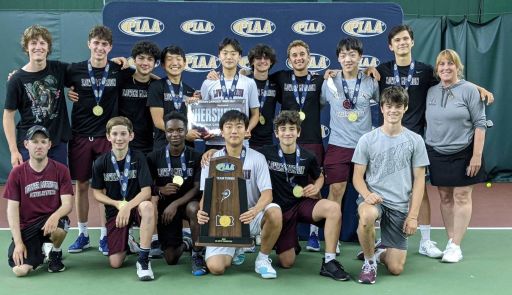 The Lower Merion High School varsity tennis team recently won the PIAA AAA state championship as they topped Central Athletic League (CAL) rival Conestoga in the final round spurred on by stellar performances from the dynamic duo of Justin and Brian Yi. With the win, the Aces did the improbable as they wrapped up their second consecutive perfect season amassing an incredible 47-0 record while winning back-to-back CAL, District and State titles.

The Aces' amazing accomplishments were recently featured in an article by Bruce Adams on the PA Prep Live website. For an in-depth look at Lower Merion's championship run, click here.

The Rams' seniors were only two of 1,557 semifinalists chosen among more than 91,000 applicants this year, selected for their outstanding leadership, academic achievements, and dedication to their community.

This year's tournament was a tremendous success as the fourth graders displayed stellar stick skills, durable defense and awesome offense each time they took the floor!

Pennsylvania's Acting Secretary of Education paid a visit to a Penn Wynne Elementary kindergarten, sharing a story and a song with students.