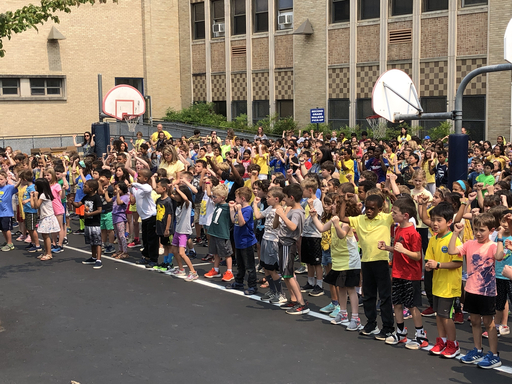 Yellow was the color of the day at Penn Wynne Elementary School, as students and staff gathered for an energetic pep rally the day before Alex's Original Lemonade Stand is held at the school.

Alex Scott was a Penn Wynne student who bravely battled cancer before succumbing to the disease in 2004, when she was just eight years old. Despite her personal battle, she wanted to help other children and hosted lemonade stands outside her Penn Wynne home, donating the proceeds to cancer research. In her short lifetime, she raised more than one million dollars.

When the stands became too big for the Scotts' front yard, they moved to Penn Wynne Elementary School. And members of the school community have become strong supporters of Alex's Lemonade Stand Foundation, which has continued Alex's work by raising more than $150 million.

Today's pep rally featured a running lemon (played by Alex's brother, Joey), Penn Wynne alumni who knew Alex, and speeches by Alex's mother, Liz Scott, along with a young cancer survivor named Lily, whose goal is to hold lemonade stands in all 50 states before her 16th birthday.

The highlight of the pep rally was a special dance performance by the entire school.

On Saturday, June 1, 2019, from 10:00 a.m. until 3:00 p.m., Alex's Original Lemonade Stand will return to Penn Wynne Elementary School. Admission is free, but participants can choose to buy a $25 all-access pass that covers all donations for the day for food and activities and includes a t-shirt.

Click below to watch a slide show from today's pep rally.