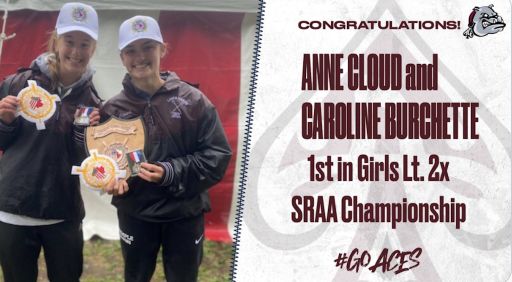 A "double" is a boat with two rowers, who each row with two oars and no coxswain, which means they also have to steer the boat as they row. The dynamic duo of Cloud and Burchette finished in a blistering time of 5:45.306, more than seven seconds ahead the runner-up boat from Harpeth Hall, a college preparatory school in Nashville, Tennessee.

The Scholastic Rowing Association of America (SRAA®) is the principal source of rules and procedures governing high school rowing. The association has helped many emerging high school crew programs by providing both sound advice and helpful contacts within the rowing community. The primary function of the SRAA® is to run the Scholastic Championship Regatta each May, determining the North American Champions. High school athletics does not allow sporting events to be held which officially decide national champions. This regatta, nevertheless, is informally recognized by the rowing community as a national championship.