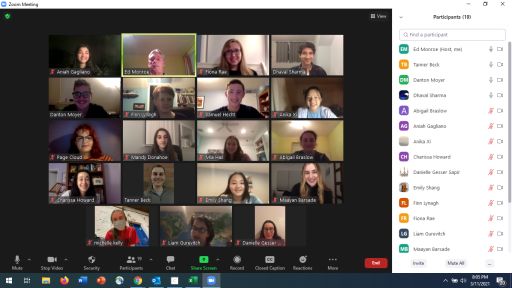 Members of the Lower Merion High School Mock Trial Team will be honored by the Montgomery County Bar Association during its upcoming Law Day celebration following the squad's highly successful, undefeated season, which the Aces capped off by winning the Region 9 Mock Trial Championship.

Law Day is held on or around May 1st every year throughout the country to celebrate the role of law in society and to cultivate a deeper understanding of the legal profession. In Montgomery County, the celebration features the swearing-in of new members of the Bar and the presentation of community-related awards. Due to COVID restrictions, this year's ceremony and award presentation will be held virtually.

Before the regular mock trial season began, members of LMHS Mock Trial had the opportunity to compete against some of the top teams from nearby states at the University of Pennsylvania's Benjamin Franklin Invitational. Although Lower Merion did not win this event, the Aces gained valuable experience that helped them once the official season began a couple weeks later.

The highlight of the year came as Lower Merion bested a tough Harriton contingent in the championship round of the Region 9 Tournament. Congratulations to all of the members of the Lower Merion Mock Trial Team on a great season!

Stakeholders are invited to participate in public forums and to answer a survey about what they want in a new superintendent.

Eight LMHS student-athletes signed National Letters of Intent as they made their official decisions on where they will continue their academic and athletic careers.

The new Sugar Maple tree will serve as a living memorial to all of the efforts that went into navigating the numerous intractable issues raised throughout the past year's COVID-19 pandemic.

The District was well-represented in this year's program as 285 students from Harriton, Lower Merion, Bala Cynwyd and Welsh Valley were recognized for their exemplary performances across all levels of the assessment.