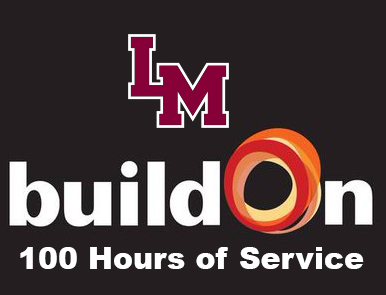 The Lower Merion High School buildOn community team recently gathered to celebrate 53 members who reached the prestigious "100 Hours of Service" milestone during the 2018-19 school year in a special ceremony in the Large Group Instruction (LGI) room. buildOn officers were joined by Principal Sean Hughes as they presented this year's honorees with a certificate to commemorate their outstanding achievement in front of their fellow club members.

Last year, 338 buildOn members served a total of 11,306 hours in the Greater Philadelphia area through more than 100 projects, including tutoring at Bethel Academy; delivering food to families-in-need; cleaning and beautifying local parks; working with shelter children; feeding the homeless; volunteering their time with The Hearth, American DanceWheels, Emily's Entourage, the Buonicanti Fund and JCHAI; supporting community events; and much more.

The LMHS buildOn Trek Program has also raised roughly $650,000 to build a total of eight schools for communities-in-need in Taverne, Menard and La Civette, Haiti; Jokaiya, Bisanpsur and Balbhadrapur, Nepal; Las Brisas, Nicaragua; and Samuel Luckwa, Malawi. This year's Trek Team, which will be headed to Guatemala to construct the program's ninth school, will be announced later this fall.

Congratulations to all of this year's honorees!

Students stay active during Merion's Month of May Marathon

In an effort to help keep students and staff active while stuck at home, physical education teacher Ed Davis challenged members of the Merion community to each log 26.2 miles in their Month of May Marathon.

Four Aces Honored in NCWIT's Awards for Aspirations in Computing

Seniors Annie Liang and Eugenia Feng and juniors Fiona Rae and Teresa Lu-Romeo were each recognized based on their aptitude and aspirations in technology and computing.

Supt. Copeland updates the LMSD community on back-to-school planning in light of new guidance from the Pa. Dept. of Education.