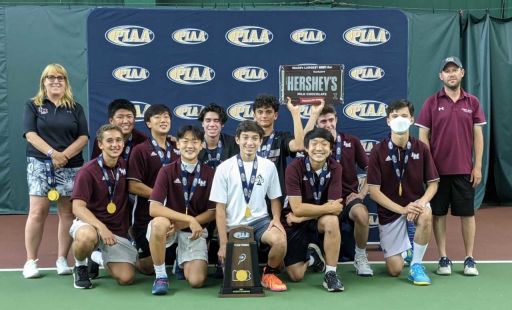 The Lower Merion High School boys varsity tennis team wrapped up their season in flawless fashion as they improved their record to a perfect 24-0 with a dominant victory over the western bracket champions Hershey High School in the PIAA AAA State Finals. The Central League and District champion Aces dropped only one set throughout all four of their state tournament matches en route to the program's first PA title since 2017.

In the championship round, Lower Merion's Vik Miller defeated Andreas Wingert at first singles, 6-4, 1-6, 10-7, while the second singles matchup went to the Aces' Justin Minerva, who topped Andy Chen, 6-4, 6-4. At third singles, Justin Yi made quick work of Anthony Eichman by a 6-1, 6-1 tally.

At first doubles, Brian Yi and Ethan Blum clinched the state crown with a win over Andrew Schrek and Jesse Mullins, 7-5, 6-2, while at second doubles, Mark Lancaster and Stoyan Angelov cruised to victory over Charles Horner and Markus Winger with a 6-1, 6-1 finish.

To advance to the finals, Lower Merion had to get through familiar District foe Harriton, while Hershey barely squeaked by Conestoga with a 3-2 win. Three Central League teams, therefore, finished among the top-four teams in the state. Congratulations to the Aces on an incredible perfect season!