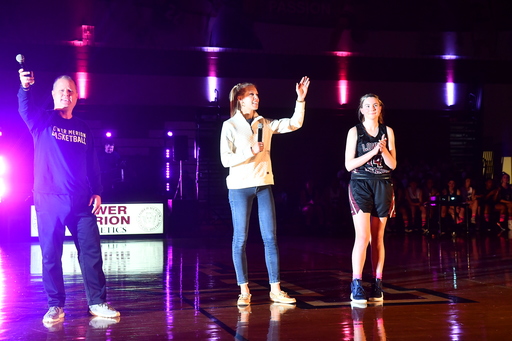 Lower Merion High School recently hosted their annual Maroon Madness festivities benefiting Coaches vs. Cancer - a community pep rally for winter athletics and activities featuring food, music, live entertainment and a line-up of special guests and performances. Nearly 1,000 community members came out to support this year's event, which serves as the official start to Lower Merion's winter athletic season and the school's annual Coaches vs. Cancer Drive. Over the past 9 years, the Lower Merion community has raised well over $60,000 to benefit cancer research.

Program highlights from this year's event included the introduction of the boys and girls teams, an intra-squad scrimmage, student dances, on-court fan contests, musical entertainment and raffles for merchandise. La Salle University head men's basketball coach Ashley Howard was on hand to address the crowd as he reinforced the importance and impact of the funds raised by the LMHS community in the fight against cancer. Prior to the event, former St. Joseph's University head coach and current assistant coach at the University of Michigan Phil Martelli tweeted in support of the Aces' event saying, "A great example of the goodness of young people - @LowerMerionSD @aceshoops @Philly CvC – follow their lead #CRUSHCANCER."

The Aces also welcomed Lauren Hart, the long-time National Anthem singer for the Philadelphia Flyers, who provided a rousing rendition of the Star-Spangled Banner before Lower Merion head coaches Gregg Downer and Erin Laney addressed the crowd and thanked everyone in attendance for their support. With all of the remarks and introductions complete, the Aces took the hardwood for the scrimmage, which was interspersed with student performances and on-court contests for prizes. To view a slideshow of pictures from this year's event, click on the image below!