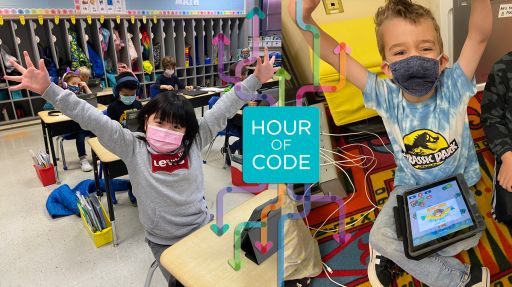 Lower Merion School District's elementary-age students recently joined millions of learners and teachers across the globe in this year's Hour of Code. Launched in 2013, this event began as a one-hour activity where students were given a fun introductory lesson on computer science in game-like tutorials designed to demystify "code" and open the doors of this seemingly arcane world to children of all ages and backgrounds. The Hour of Code has since transformed into a global phenomenon and celebration of computer science with unprecedented support from industry giants such as Microsoft, Apple and Amazon, among others.

As part of Computer Science Education Week (December 6-10), students at Belmont Hills, Cynwyd, Gladwyne, Merion, Penn Wynne and Penn Valley had tons of fun participating in this year's Hour of Code under the guidance and leadership of Elementary Technology Specialist Jen Goldberg. Students played a variety of engaging games that introduced the basic concepts of programming, however, rather than utilizing standard text to create the code, they used Blockly, which employs colorful visual blocks that are easily dragged and dropped to write programs.

Some first graders learned about algorithms while creating code to help an Angry Bird move through a maze to get to the Evil Pig that stole its eggs, while other classes explored programming using BeeBot robots, which are designed as a fun and captivating tool to introduce children to important coding concepts like sequencing, estimation and problem-solving.

Students also programmed their very own dance party through Code.org's "Dance Party" activity where students, again using Blockly, chose their favorite dancers from a cute cast of animals, manipulated their dance moves in response to the music (provided by popular artists like Ed Sheeran, Justin Bieber and The Jonas Brothers) and made their characters interactive, all before getting up from their desks and joining the dance party themselves!

Finally, towards the end of the week, students tried their hand at the 'Hello World!" activity using Sprite Lab - a tool that helps build imaginative and fun projects using cute characters known as sprites. Students and their sprites worked together to ultimately create code that output the iconic line of text "Hello World!" - a famous phrase in the world of beginners' computer science classes.

The overarching objective of the Hour of Code is not to transform students into expert computer scientists within the sixty-minute lesson. One hour is enough, however, for students to discover that computer science is fun, creative and accessible for children of all ages and backgrounds. A key measure of success for the Hour of Code is not mastery but inspiration. Success is reflected through fostering interests and passions in computer science as well as through increased participation across gender, racial/ethnic and socioeconomic groups.

To see a slideshow of pictures from throughout the week, click on the image below! (Photo Credit: Jen Goldberg)