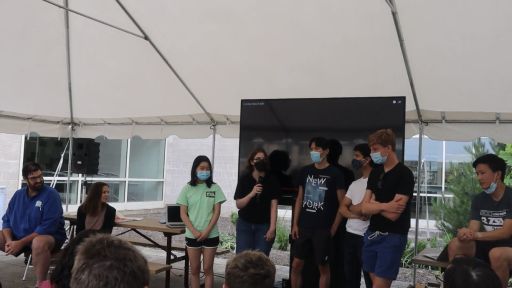 Despite the hurdles presented by a virtual competition, the LMHS contingent persevered through the challenges and recorded one of the best performances on the national stage in school history. Chapter officer Katie Fang noted that, "There were often difficulties presented in being able to easily communicate with our teams and the chapter, and a lot of us did not know one another well due to the virtual environment, but we ultimately were able to overcome these setbacks and work together to put ourselves on the National map."

The National Conference also marked the departure of an amazing class of seniors who greatly contributed to LM-TSA's rise on the national stage over the past few years, including senior Elliot Ginzburg, who served as Lower Merion's first Pennsylvania TSA President and whose stalwart leadership helped guide the chapter through challenging times. To commemorate his initiative during his four years in LM-TSA, Ginzburg was presented with the Dan Zollman Leadership Award, an honor bestowed upon exceptional STEM pioneers. The senior class will be dearly missed when LM-TSA returns next fall for the next chapter of its journey.

This FREE event open to the entire community will take place on Saturday, October 8th from noon to 4:00 p.m. at LMHS!

Ways to Get Involved in LMSD

Dr. Mumin shares a variety of ways parents and guardians can get involved in the Lower Merion School District.

The Pennsylvania Department of State & Education recognized the Rams for the outstanding efforts of students to educate, engage and inform their fellow classmates about how to get involved in the voting process.

Starting on October 1, 2022, all students enrolled in the Lower Merion School District will be eligible to receive a free breakfast at school. No pre-ordering needed.