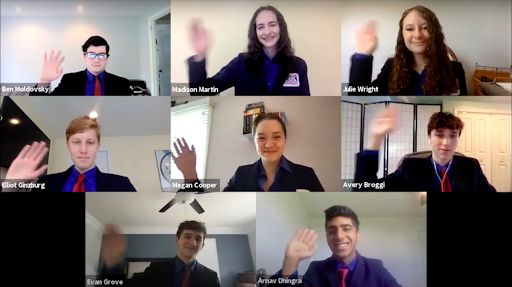 Lower Merion High School's Technology Student Association (TSA) chapter stormed to an impressive finish at the 2021 Pennsylvania TSA Conference, riding high off their strong performance at Regionals in February. With 42 event placements, 17 top-three finishes and eight event wins, this State Conference marked one of the most rewarding competitive seasons in LMHS-TSA history, notwithstanding the aberrant circumstances of this year.

This year's conference was held entirely virtually, an experience that was a far cry from what most veterans of the club were used to. Nonetheless, LMHS-TSA stood up to face the challenge and their efforts paid off as the Aces came out on top in a litany of events ranging from Biotechnology to IT Fundamentals to the classic Chapter Team event. Club officer Jonathan Xu '22 noted that while the online setting for the conference presented certain hurdles along the way, ultimately the club and its members were able to perform well and take home wins across a broad spectrum of events.

Another highlight of the State Conference came from the highest tier of leadership within Pennsylvania TSA with LM senior Elliot Ginzburg taking up the gavel as PA-TSA President to lead the general sessions and business meeting. Ginzburg - a member of TSA since sixth grade as well as a two-time state officer - had worked tirelessly with the state officer team in preparation for the virtual State Conference. During the Awards Ceremony, Ginzburg offered heartfelt appreciation to those who helped him get where he is now.

Having excelled at the state level, LMHS-TSA looks forward to making a statement on the national stage come the end of June, when the 2021 TSA National Conference will take place. With last year's national conference having been cancelled due to COVID, the club is eager to jump back into the fray of competition and face off against chapters from all across the country and the world for a chance to win big when the stakes are highest. This year's State Conference certainly proved they are ready to do just that.

Stakeholders are invited to participate in public forums and to answer a survey about what they want in a new superintendent.

Eight LMHS student-athletes signed National Letters of Intent as they made their official decisions on where they will continue their academic and athletic careers.

The new Sugar Maple tree will serve as a living memorial to all of the efforts that went into navigating the numerous intractable issues raised throughout the past year's COVID-19 pandemic.

The District was well-represented in this year's program as 285 students from Harriton, Lower Merion, Bala Cynwyd and Welsh Valley were recognized for their exemplary performances across all levels of the assessment.