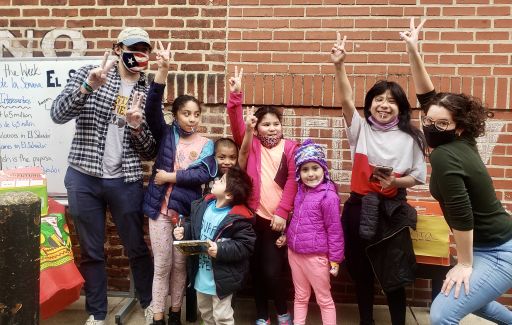 *This story was written by LMHS senior Sydney Zelinger, who is a student in the Spanish 6H: Voices & Voiceovers class.*

As course registration began for the 2020-2021 school year, Lower Merion High School students had the opportunity to choose from a variety of classes to enhance their knowledge of and fluency in their chosen foreign languages. Among those courses was Spanish 6H: Voices & Voiceovers (also referred to as Global Competence), which was first conceived by the World Language Department to create an engaging, innovative and impactful new learning opportunity for students. Over the next two years, Señor Sean Capkin developed Voices & Voiceovers with an emphasis on strategic use of language, but also with a close eye on several of the Strategic Pathways detailed in Lower Merion School District's Strategic Plan, All Forward.

At the heart of the course is the exploration of minority voices in literature, film, art and music, which is a germane and timely topic considering the current social climate. Through guided lessons and independent study, students explore social justice issues in Latin American communities and work to deduce their root causes, learn about the strengths and weaknesses of past solutions to societal ills, and consider the needs of less fortunate communities. Señor Capkin, who lived and taught in the town of Cofradia, Honduras, was well aware of the transformative power of experiential learning and volunteerism, which is why he designed the course with a focus on community service and Strategic Pathway #2: Transformative Curriculum. Through the incorporation of service-learning opportunities, Voices & Voiceovers extends the curricular experience beyond the walls of Lower Merion High School and encourages students to take positive risks in order to maximize both the impact of their volunteerism and their own personal growth. Not long after the course was officially made available to students, however, COVID-19 made its presence known and Señor Capkin realized it was going to be much more difficult to safely coordinate real-world learning opportunities.

While working to develop partnerships with local organizations, Señor Capkin and his students faced a discouraging number of obstacles as a result of new public health guidelines put in place to combat the pandemic, but after lots of research and much persistence, they eventually came across a promising non-profit by the name of Mighty Writers.

"I was looking for authentic resources on the topic of immigration for my Spanish 4H class when I read an article on NPR about a non-profit that was helping young, undocumented immigrants express their feelings through writing," said Señor Capkin. "I saw all of the amazing projects they have been involved with and the positive press that they have received in Rolling Stone, The New Yorker, NPR, the Inquirer and others. I thought it could be a positive opportunity for us."

Señor Capkin and his students decided to reach out and quickly received a reply from Selekha Ramos, the Director of Bilingual Programs at Mighty Writers. After a few conversations, it became readily apparent that the resources available through the Voices & Voiceovers course and its students were an ideal match for the growing needs at Mighty Writers. Knowing where the organization needed the most support provided the framework for the student-driven design of their service project in support of the Mighty Writers' mission.

The main mission of Mighty Writers is to "help kids think and write with clarity" through a variety of literacy initiatives, workshops and tutoring, all of which were forced to go virtual when the pandemic struck. Ramos noted that "transitioning [writing] workshops to Zoom and staying connected to our families without a physical space" had been among the most challenging obstacles for their young organization. COVID-19 also gave rise to other problems for families who relied on Mighty Writers and the services they provided, precipitating an amendment to the Philadelphia-based non-profit's mission.

Mighty Writers realized their students could not "think or write with clarity" if they were hungry, so their mission evolved to include efforts to address the rising number of families facing food insecurity. Mighty Writers immediately began collecting groceries, along with books, diapers and other in-demand items. They established distribution centers in Kennett Square and South Philadelphia where families could pick up crates of food and other essential materials.

Throughout this spring, it has been extremely rewarding for Señor Capkin to watch his students foster such a strong spirit of community as they have become deeply involved in all of the service opportunities offered by Mighty Writers, whether they are helping children with their writing or working to combat food insecurity. And with many of the Mighty Writers' families being native Spanish speakers, the Lower Merion students have been able to engage in authentic, real-world opportunities to practice and apply their Spanish skills.

Spanish 6H student Paul DeSouza '21 volunteers at the South Philadelphia distribution center where food, books and other items are handed out to local families-in-need. "From the start, I knew that Lower Merion was a very privileged community," said DeSouza. "Volunteering at Mighty Writers and seeing the disadvantages and struggles that a lot of communities endure made me want to contribute and help others out in more ways than simply donating money."

Distribution of goods in Kennett Square follows a similar procedure, except that the resources are administered via drive-through. Charlotte Morales '21 volunteered with the Kennett Square group—but not with handing out supplies. Instead, Morales is a member of the carpetas poderosas (mighty folders) group who reads and provides positive, constructive feedback on children's written work in the Mighty Writers workshops. "My favorite moment working with Mighty Writers was when I reviewed this little girl's letter that she wrote to her mom for Valentine's Day," recounted Morales. "She was very young and it was adorable to see her trying her best to express her love."

Morales and DeSouza also played a key role in the recent supply drive organized by the Voices & Voiceover students, where they collected a variety of in-demand items and other essentials, which were then donated to Mighty Writers for distribution to their families.

Despite the initial bumps in the road born of the pandemic, the Spanish 6H crew was able to work collaboratively and think critically to solve each problem they faced in their efforts to create a positive impact in the Greater Philadelphia area. Moving forward, Señor Capkin hopes to deepen Lower Merion's partnership with Mighty Writers, develop more relationships with local community groups, and to get even more students involved in service-learning. Some students were so inspired by their work in Voices & Voiceovers, they decided to design their Senior Projects around helping support the Mighty Writers program.

For Señor Capkin, watching his students apply their knowledge of the Spanish language while challenging themselves to step out of their comfort zones to make a difference in their community has been a rewarding experience. The individual growth and personal development experienced by the Voices & Voiceover students is a testament to the transformative power of non-traditional learning and education through service. With many of these students being seniors, the real-world experience gained by the Spanish 6H students will undoubtedly serve them well in their future endeavors.