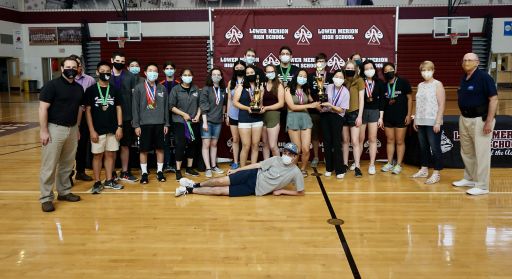 The Lower Merion High School Science Olympiad team was recently honored in a special ceremony in Bryant Gymnasium as the Aces received all of the well-earned hardware from their recent pair of championship performances at the Regional and State conferences. A representative from Pennsylvania Science Olympiad was on-hand to present team members with each of their individual event medals as well as the gleaming Regional and State championship trophies.

The Lower Merion contingent followed up a dominant display at regionals with an equally outstanding performance at the state competition - one of the best in school history - as the Aces earned 15 top-three placements and eight first-place finishes en route to capturing the Keystone State's highest honor. With the win, the Aces punched their ticket to the National Conference, which took place virtually May 17-22.

It had been a difficult year for the entire Science Olympiad community as all events, competitions and much of teams' preparations were forced to go virtual due to the ongoing COVID-19 pandemic, but the 2020-21 season was especially trying for Lower Merion as longtime coach Mike Stettner suddenly passed away this past February. Mr. Stettner, who joined the LMHS faculty in 1995 and spent his career educating high school students in earth sciences, loved his students and found great joy in coaching Science Olympiad. While at the helm, Mr. Stettner helped pilot the program to a pair of state titles, tremendous success at the local and regional levels, and several appearances at the National competition. Despite the devastating loss, the team decided to continue their season in honor of Mr. Stettner. It was only fitting that the Aces went on to record one of the best seasons in school history.

Congratulations to LMHS Science Olympiad on all of your tremendous accomplishments!