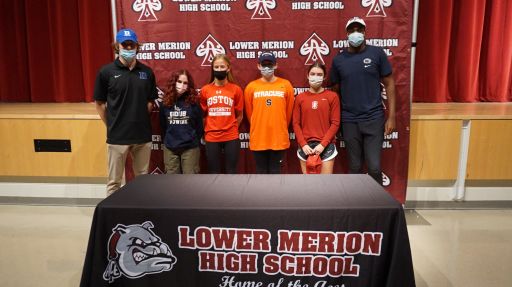 Six Lower Merion High School student-athletes recently signed National Letters of Intent as they made their official decisions on where they will continue their academic and athletic careers. Congratulations to each of this year's signees and best of luck in all of your future endeavors on the fields, courts and rivers as well as in the classroom! Go, Aces!

Henry Bard will be attending Duke University to play lacrosse. He has earned both All-State and All-League honors as well as both MVP and Defensive MVP awards within the Lower Merion team. Bard is also a member of the Aces' varsity basketball team.

Macy Bronte will be attending George Washington University to join the crew team. Bronte, who serves as captain for Lower Merion, has earned a silver medal at the Head of the Schuylkill Regatta. She is also a member of the National Honor Society.

Caroline Burchette will be attending Boston University for crew. Through her years with the Aces, Burchette has earned the Best Boat Award twice and has finished in either first or second place in the following races: Scholastic National Championship, Stotesbury Regatta, City Championship, Head of the Schuylkill and the Virtual Mid-Atlantic Championship. She is also a member of Lower Merion's volleyball team.

Annie Cloud will be attending Stanford University for crew. During her time at Lower Merion, Cloud has twice earned the Best Boat Award along with the Hammer Award and Tom McGovern Award. Cloud has finished in either first or second place in the following races: Scholastic National Championship, Stotesbury Regatta, City Championship, Head of the Schuylkill, the Virtual Mid-Atlantic Championships and the Indoor National Championship. She is also a member of the USRowing Scholastic Honor Roll.

Emma Cloud will be attending Syracuse University for crew. Cloud has earned a Best Boat Award along with the Hammer Award. She is also serves as captain for the varsity basketball team.

Demetrius Lilley will be attending Penn State University to play basketball. Lilley has earned All-League and All-State honors while helping lead the Aces to a District title and advance to the state semi-finals.