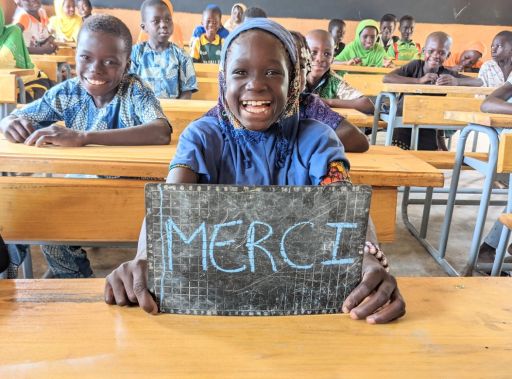 The pandemic may have turned the world upside down, but that didn't stop Lower Merion High School's buildOn community team from persisting in their mission of working to break the cycle of poverty, illiteracy and low expectations through service and education. Although unable to travel over the past year-and-a-half due to ongoing issues surrounding the coronavirus, Lower Merion buildOn continued its annual dogged fundraising campaigns and now, for their efforts, the children of Fognie, Burkina Faso and Caserio Buena Vista, Guatemala will have brand new primary schools in which to learn.

Over the last eight years prior to the arrival of COVID, Lower Merion buildOn's Trek Program raised roughly $650,000 to build eight schools for communities-in-need in Taverne, Menard and La Civette, Haiti; Jokaiya, Bisanpsur and Balbhadrapur, Nepal; Las Brisas, Nicaragua; and Samuel Luckwa, Malawi. The students who tirelessly worked to raise these funds had the life-changing the opportunity to travel to these villages and live with host families as they worked side-by-side in partnership with local community members to construct the schools. It is a truly awesome experience to which all buildOn members aspire.

By March 2020, the students selected for Trek had accomplished the same impressive feat as all of their predecessors by successfully meeting the lofty fundraising goal. Two weeks prior to departure, however, after all of their hard work, the students learned they would not be able to travel to Guatemala to help construct the school due to myriad covid-related concerns. Although they were crestfallen, the students wanted the community to have their school all the same, gifting the money to the village to move ahead on construction without them.

During the 2020-21 school year, led by a portion of students who remained from the Guatemala Trek Team, the LMHS buildOn program found their fundraising stride yet again as they were able to successfully raise enough money for another community-in-need. This time the beneficiaries would be the villagers in Fognie, Burkina Faso. The school was completed in June 2021.

Due to a series of delays, construction in Guatemala fell way behind schedule, however, things appear to be back on track. At a recent Lower Merion buildOn meeting, students live-streamed with the villagers in Caserio Buena Vista for the Groundbreaking Ceremony to commemorate the first day of construction on the community's new school.