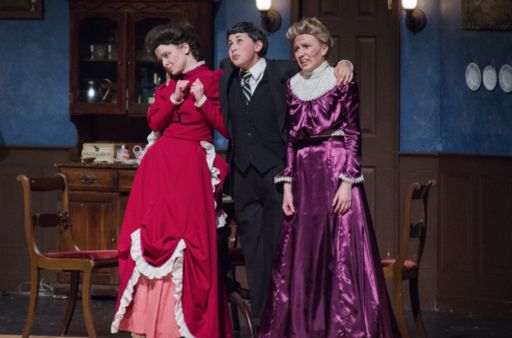 The LM Players recently took to the stage during their Spring production of Arsenic and Old Lace, which was performed in a series of four shows April 25-27 at Lower Merion High School!

The play is a farcical black comedy revolving around the Brewster family, descended from the Mayflower settlers, but is now composed of insane homicidal maniacs. The hero, Mortimer Brewster, is a drama critic who must deal with his crazy family and local police in Brooklyn, New York, as he debates whether to go through with his recent promise to marry the woman he loves.

His family includes two spinster aunts who have taken to murdering lonely old men by poisoning them with a glass of home-made elderberry wine laced with arsenic and "just a pinch" of cyanide; a brother who believes he is Theodore Roosevelt and digs locks for the Panama Canal in the cellar of the Brewster home (which then serve as graves for the aunts' victims); and a murderous brother who has received plastic surgery performed by an alcoholic accomplice, Dr. Einstein, to conceal his identity.

To view a slideshow of pictures from a recent performance, click on the image below!

The application window for a Harriton parking pass for SENIORS only will open on July 1, 2020 and close on August 28, 2020.