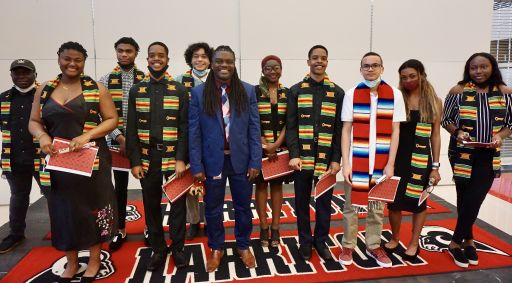 Harriton High School recently hosted Rites of Passage – a special ceremony formally honoring the graduating class of students in the POWER Scholars Program – as classmates, family and friends gathered in the cafeteria, rather than the courtyard due to earlier inclement weather, to celebrate this year's seniors with remarks from students, teachers and administrators; presentations of various awards; rhythms of traditional African drums; a delicious buffet-style potluck dinner; and the Kente Ceremony.

In African tradition, rites of passage are timeless rituals marking and celebrating important life transitions; holistic development of the individual or group; and changes in a person's status, roles and responsibilities. These ceremonies also can serve as an opportunity to recognize that entry into adult life involves the realization of social obligations and the assumption of responsibility for meeting those obligations.

Principal Scott Weinstein opened the evening by welcoming those in attendance and providing laudatory remarks about this year's POWER Scholars seniors as well as the educator that has helped make the program such a success, Mr. Nate Bantoe, who also teaches chemistry and serves as the sponsor for the District's National Society for Black Engineers (NSBE). Mr. Bantoe, who when introduced received a rousing standing ovation, then took over emcee duties before introducing a series of student speakers led by Khayanna Carter, who shared an inspiring poem recitation. Next up were Maya Burke, Aaron Trader, Lyrica Robinson and Isaiah Trader, who each spoke about the experiences of their "Rites of Passage" journeys, obstacles overcome, lessons learned and future aspirations. Mr. Bantoe then recognized students who participated and excelled in Harriton's NSBE chapter and presented others with well-deserved awards.

Towards the end of the ceremony, each POWER Scholar received a special Kente cloth stole. This beautiful and symbolic sartorial item is one of the most important and widely recognized African textiles. The cloth's provenance dates back 375 years to the Ashanti and Ewe tribes of the west African nation of Ghana. The colors of the Kente cloth were originally made from different trees that created the red, green and yellow dyes. According to Ashanti tradition, red represents the blood of forefathers, yellow represents gold and green represents the forest. Thread would then be soaked in the dyes and woven together to create magnificent fabrics for the king and other tribal royalty. In modern times, the wearing of Kente cloth has become widespread to commemorate special occasions and is concomitant with success, high status and cultural sophistication.

Prior to the event's conclusion, a family member in attendance asked to make a short, impromptu speech as she thanked and praised Mr. Bantoe and the POWER Scholars program for all of the critical work that has been done to build a safe and welcoming educational and social environment that inspires students to reach their full potential.

Congratulations to the POWER Scholars' Class of 2021 and best of luck in your future endeavors!

POWER is an acronym for "Partnering for Opportunity, Wisdom, Esteem in Responsibility." In recognition of and pursuant to the highest aspirations of African Americans social, cultural heritage and awareness, the program was named from a quote by Mary McLeod Bethune, who started the first school for African Americans after the Civil War.

POWER provides a forum that is safe and healthy for African American students to voice their ideas, differences, goals, along with celebrating their cultural heritage. In POWER, students have the opportunity to dialogue about the importance of receiving a rigorous and well-rounded education through high-level and rigorous course work. In POWER, students gain an awareness of the support services available to them that will help prepare them for college, a career, and civic participation beyond high school.