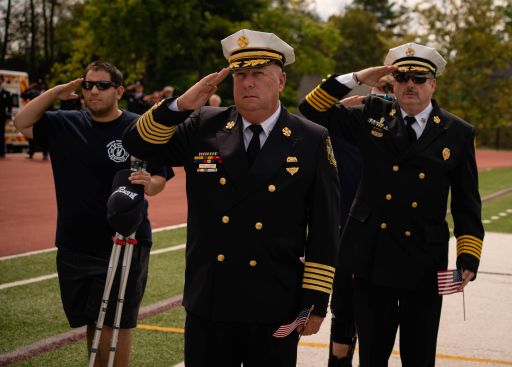 Prior to kickoff at the Sept. 11, 2021, Lower Merion-Harriton football game, the Lower Merion School District community held a special ceremony to solemnly commemorate the 20th anniversary of the tragic events of 9/11 and to remember all those who lost their lives on that fateful day.

The Aces and Rams used the occasion to welcome and celebrate the efforts and sacrifices made by local first responders – the veterans, police officers, firefighters and emergency medical technicians - who risk their lives everyday in the service of others.

The first responders in attendance marched on to the field and were joined by the Lower Merion and Harriton coaching staffs and players before Harriton parent the Rev. David Smith provided poignant remarks thanking all the brave men and women who put the welfare of others ahead of their own on a daily basis.

Rev. Smith explained how this has been a particularly difficult year for local first responders as both the Penn Wynne and Belmont Hills fire departments went through the unthinkable in recent months as firefighters Sean DeMuynck and Thomas Royds tragically lost their lives in the line of duty. Members of both the DeMuynck and Royds families were in attendance at the game. Current LMHS student Sam Shaffer and alumni Alex Fischer, both volunteer members of the Belmont Hills Fire Department, were also injured in the accident that took the life of Royds. Shaffer and Fischer were among the first responders being honored during the ceremony. The program closed with a moment of silence and a non-denominational prayer led by Rev. Smith.

As difficult as it may have been, the Lower Merion and Harriton players then had a game to play. Ultimately the day belonged to the Aces as the home team captured an important Central Athletic League victory by a 47-6 tally.

Fifteen members of the LMHS crew team and their families spent Sunday cleaning up debris left behind by Hurricane Ida at Flat Rock Park.

The senior volleyball standout, who holds the school record for blocks in a season, has helped lead the Aces to a perfect 4-0 start to their fall campaign.

Parents/guardians are asked to follow these procedures for LMSD's Open House nights.

These students are among approximately 16,000 semifinalists overall and will be eligible to compete for 7,500 scholarships worth nearly $30 million dollars.