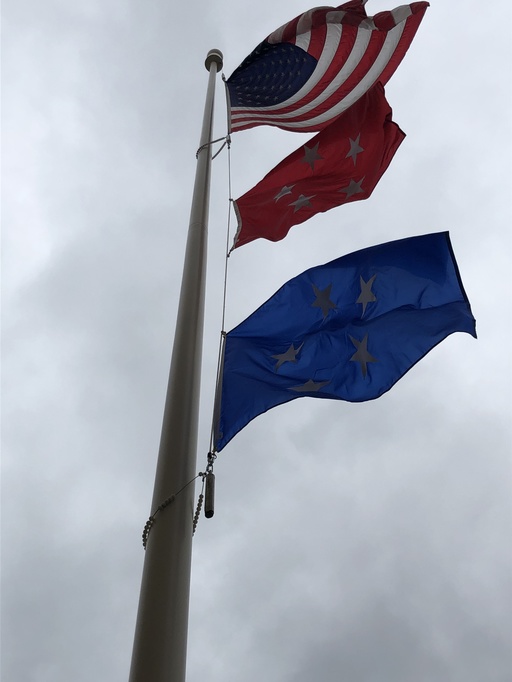 Gen. Arnold, who was born in Gladwyne and graduated from LMHS in 1903, is the only officer in the history of the U.S. military who held the rank of five-star general in two different military branches (U.S. Army and U.S. Air Force). He graduated from West Point in 1907 and is often referred to as the father of the modern U.S. Air Force. Gen. Arnold was a distinguished Freemason and National Sojourner.

In accepting the flags, LMHS principal Sean Hughes said, "As a veteran staff member, I've been here long enough to know the historical significance of General Arnold and his connection to our high school and community. Hard to believe, but when "Hap" attended LMHS – there were only seven faculty members, we only offered a two-year curriculum, we had fewer than 100 students and the high school was not on this site."

Subha Robinson, vice president of the Lower Merion Board of School Directors, also thanked the donors for the flags. "We have many alumni of whom we are very proud. And General Arnold is certainly among them. We are grateful for his exemplary service to our country in two branches of the military. That accomplishment makes him unique, but in some ways also similar to so many of our graduates, who have entered our doors to learn and gone forth to serve."

"An important tenet of our District strategic plan, 'All Forward,' is to encourage all of our students to find their passion and to give them the skills necessary to pursue that passion. Although General Arnold's time at Lower Merion preceded our plan, he embodied its vision. His passion and skill for aviation allowed him to reach great heights – both literally and figuratively."

"We hope these flags will remind our current students to reach for the skies in whatever endeavors they choose."

To see photos of the dedication ceremony, click through the slide show below:

Free COVID-19 vaccines are available to community residents age 12+ at Bethel AME Church in Ardmore on August 7 and 28, 2021.