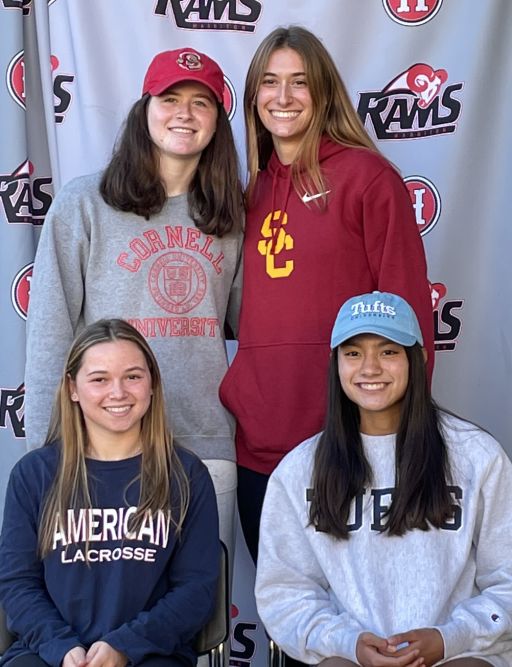 Five Harriton High School student-athletes recently signed National Letters of Intent as they made their official decisions on where they will continue their academic and athletic careers. Congratulations to each of this year's signees and best of luck in all of your future endeavors on the fields, courts, rivers and ice as well as in the classroom! Go, Rams!

Annie Aspesi will be attending Tufts University to play basketball. Aspesi is a four-year member of the varsity basketball, lacrosse and soccer teams. She earned First-Team All-Central League and All-Main Line honors in her sophomore and junior years.

Grace Dwyer will be attending Cornell University where she will be playing ice hockey and lacrosse. Dwyer is a two-time bronze medal winner at USA Hockey Nationals and earned a spot on the U18 National Team. She has garnered Second Team All-Main Line, All-Central League Honorable Mention and All-Philly Third Team honors for lacrosse and was a member of the most recent state championship winning team. Dwyer has also earned an All-Central League Honor Mention nod for field hockey.

Rachel Kolton will be attending American University for lacrosse. She has earned an All-Central League Honorable Mention designation as a member of the Harriton lacrosse team.

Josh Smith will be attending Dickinson College to play lacrosse. Smith is a three-year captain of the varsity team and was named Harriton's 2021 Offensive MVP. During the 2021 season, he was named to the All-Central League Honorable Mention team.