Cynwyd Principal Gets Slimed for a Good Cause 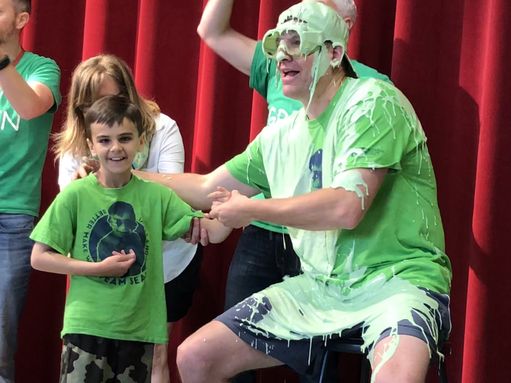 Cynwyd Elementary School Principal Dr. Daniel Martino promised his students that if they raised more than $6000 for charity, he would get slimed.

The students more than met the challenge during their Team Sean Walkathon. Sean Hermann is a Cynwyd 5th grader who's been diagnosed with a rare disease called Ataxia-Telangiectasia (A-T). A-T is a genetic neuromuscular disease that affects only 400 children in the United States. Students asked friends, family and neighbors to sponsor them for laps the walked around the Cynwyd gym.

Fifteen students raised more than $100 each. Some students emptied their piggy banks and sent in bags full of coins. And Sean's friend Rowan Muhly raised more than $740 by going door-to-door in his neighborhood and explaining that he wanted to help his friend.

In all, the students raised $8,216.17. Despite their success, Dr. Martino tried to bargain his way out of getting slimed. First, he tried scooter bowling, declaring that if he could knock down all the pins by rolling into them with his body on a scooter launched by PE teacher Mr. Yocum, he should not have to be slimed. But the students and Mr. Yocum didn't want to let him off the hook.

Next, Dr. Martino said if anyone in the gym could make a half-court shot into the basketball hoop, he'd accept his sliming. One student missed. Then a teacher missed. But Mr. Yocum had a plan, inviting in Cynwyd alumnus and current Bala Cynwyd Middle School 8th grader Sam Brown to try the shot. He made it on the first try.

Sean, with a little help from the 5th grade teachers, was very happy to pour the green slime all over Dr. Martino, as the Hermann family and two television crews looked on.

For photos from this fun-filled morning for a worthy cause, please click on the slide show below: