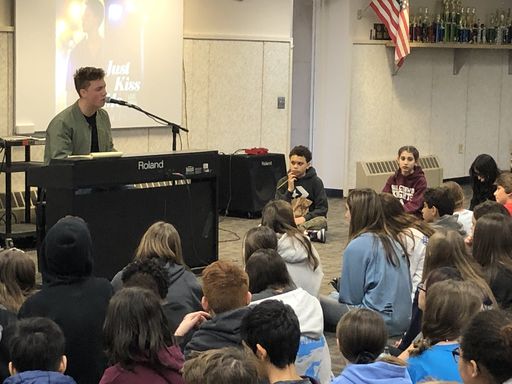 Louis Knight, a contestant on "American Idol," who graduated from Lower Merion High School in 2018, performed for students at Bala Cynwyd Middle School on March 4, 2020.

Knight explained that his family moved to the United States from England just before he started at BCMS. He said he used music as a way to quell his nerves about starting in a new school in a new country. And he credited his teachers, including his 7th and 8th grade NOW teacher, Mr. Scott Idol, with helping him adjust to his new home.

He also told the students that he was very nervous to try out for his first BCMS choir solo in 8th grade. But he has clearly overcome his nerves, as he was able to perform for "American Idol" judges Katy Perry, Luke Bryan and Lionel Richie and earn a Gold Ticket to travel to Hollywood.

Knight leaves for California on Monday, but first wanted to thank his teachers and let current BCMS students know that they're lucky to go to school there. He admitted that he wasn't always the best student academically, but encouraged them to chase their dreams.

Knight performed for four sections of students. He not only sang and played piano for them, but encouraged them to write down two rhyming lines of lyrics, which he quickly matched to original music and performed. The students paid rapt attention and lined up for photos.

Knight's former teachers said though he was quiet and shy in middle school, they always knew Knight had talent and that "special something" that is leading to his current success.

To see a slide show of photos from Knight's morning at BCMS, click below.

LMSD's Strategic Plan, "All Forward," provides a framework for a collective, intentional and positive approach to change. Its five aspirational pathways guide us toward continual innovation and transformation to further educational excellence for every student. Louis Knight's pursuit of a singing career is an example of Strategic Pathway #1: Redefining Success, which calls for a definition of success that incorporates creativity, critical thinking, love of learning, and innovation for each and every child. To learn more about #LMSDAllForward and the Strategic Pathways, click here.

A Letter to Families from Superintendent Copeland

Later this week, construction work will resume at the site of the planned Lower Merion School District middle school at 1860 Montgomery Avenue in Villanova.

The staff at Gladwyne Elementary School missed their students so much they put together a special video just to let them know!

Who Let the Bulldogs Out? A Message from Belmont Hills

The Belmont Hills Elementary School mascot Bernard the Bulldog recently went on a journey to discover "who let the dogs out" and see what staff members were up to while at home.

The staff at Harriton High School put together a video for their students with special musical accompaniment provided by Mr. Bizich and the Rams' choir!