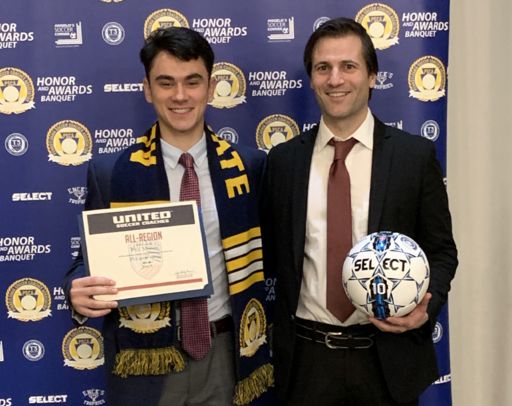 Lower Merion High School senior Philip Monos and Head Coach Nico Severini were recently invited to the Pennsylvania Soccer Coaches All-State Award Ceremony, which was held in Harrisburg, PA. Monos recorded a stellar final season with the Aces as he led the team in points with seven goals and 17 assists while helping to guide Lower Merion to an impressive regular season record of 17-0-1, a Central League title, and a #11 ranking in the nation before bowing out in the round of eight in the PIAA State Tournament. For his efforts, Monos garnered Central League Most Valuable Player honors, was named to the 2020 Pennsylvania All-State and Regional All-American teams, and earned first-team honors for the Central League, Main Line Times and All-Southeastern PA.

Following graduation later this year, Monos, who served as team captain for the Aces, has chosen to continue his academic and athletic career at Franklin & Marshall College.

"Phil was a tremendous leader and exemplified hard work and dedication to the game and to the team," said Coach Severini of his senior standout. "The motto for us is 'Team Together' and Phil took this to heart as a captain and leader for the program. This award ceremony was an honor for Phil and the Aces soccer program, and we wish Phil the best of luck in his future academic and athletic career at F&M."

Parent-Teacher conferences will be held on Thursday, February 27th from 6 p.m. to 8 p.m.