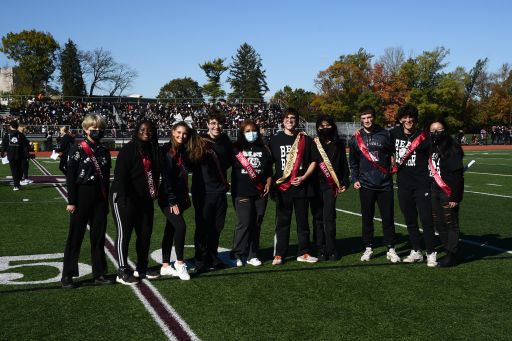 Lower Merion High School's recent fun-filled Homecoming Weekend kicked off on the afternoon of Friday, November 5th with an outdoor Pep Rally on Arnold Field ahead of the 125th Annual Radnor Football game - widely considered among the longest-running public high school football rivalries in the nation.

Throughout the Pep Rally, spirit heads, dancers, cheerleaders, the drill team, football players and staff all had their moment in the sun at center field prior to the announcement of the Homecoming Court, which was comprised of Leonne Chang, Marlene Chmielewski, Jayde Harrison, Charlie Hurwitz, Jack Lledo, Anisa Pugh, Mark Riggio, Rachel Zhang and the eventual Homecoming Royalty, Leo Solga and Caroline Vo!

Following the Pep Rally, students made their way to Pennypacker Field for the annual Maroon & White Flag Football Game as teams of ninth, tenth, eleventh and twelfth graders went head-to-head competing for this year's title. While the games were highly competitive, good sportsmanship was on full display throughout the afternoon. When it was all said and done, in a somewhat surprising turn of events, it was the ninth grade class that ultimately took down their upperclassmen opponents for Maroon & White bragging rights!

After an exciting day filled with school spirit, the Aces finally gathered at Lower Merion High School for the Homecoming Dance as students spent the evening dancing with their classmates in the cafeteria and playing games in the gym!