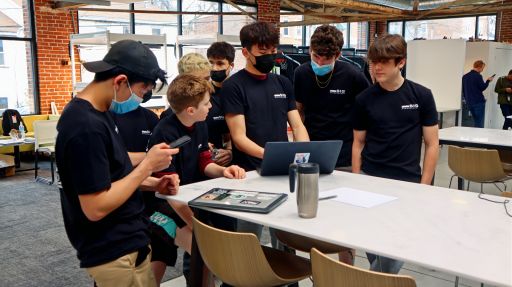 Lower Merion High School recently hosted the 6th Annual CodeLM programming competition as participants from ten area schools gathered at the Fluxspace in Norristown to put their computer science skills to the test. Competing in groups of three, teams were tasked with completing a series of challenging problem sets using programming languages like Java, Python and C++ to escape and survive an imaginary global apocalypse.

The day began with a presentation by Geoff Buhn – Senior Manager of Software Development with the Susquehanna International Group (SIG), which was the sponsor of this year's event - who discussed how computer science and technology can be applied in fields like market research and stock trading. Ryne Anthony, Director of Fluxspace, also shared a few words as he welcomed everyone to the facility.

With the introductory remarks complete, the competition portion of the event began. Using an automated dashboard developed by Lower Merion's Computer Science Club, participants worked through a series of 14 programming-related scenarios centered around the event's theme of surviving an apocalypse. The teams used their coding skills to escape Earth, decrypt messages from other rocket ships and colonize new planets, among other creatively-crafted quandaries.

Following lunch, students had the opportunity to play a card game called Wizard and enjoyed a tour of the Fluxspace facility. The event concluded with an award ceremony as the top-three teams from each division were given a programmable Tello Drone, SIG merchandise or a Rocket Book as prizes.

Congratulations to the LMHS Computer Science Club on another outstanding event as well as to all of the participating students! Award-winning teams from both Lower Merion and Harriton are listed below!